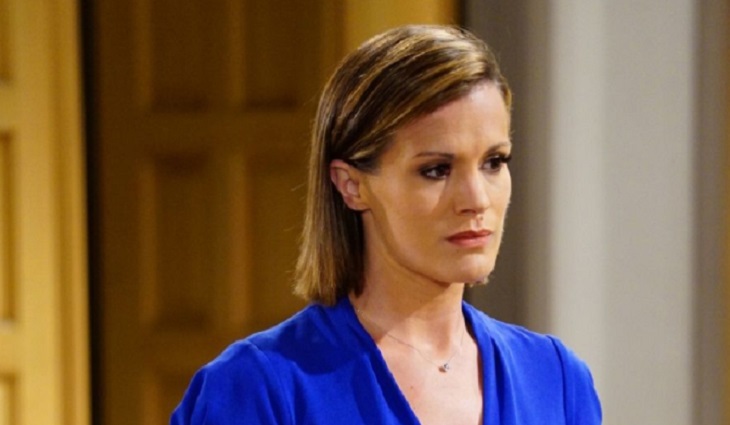 It appears as though those stacks of cash that were hidden in the penthouse vents aren’t Adam’s (Justin Hartley). Instead, the loot appears to be part of a stash that Chelsea’s been building as some type of backup plan. What she intends to do with the pile of cash she put into Adam’s final resting place remains unclear as of now.

Related: The Young and the Restless Spoilers: Break Ups and Make Ups in Genoa City

Viewers were recently shown something that only Chelsea knows. She’s been leading a double-life, posing as Alexandra West. J.T. learned that person is dead, but that someone used her name and social security number as part of a plan to defraud Fenmore’s and seemingly steal from Chelsea 2.0.

Savvy soap fans know that Egan has announced her plan to leave Y&R. Chelsea will soon be written out as a result, though Egan did advise her followers that she wasn’t going to be gone forever.

This week, Phyllis happened by Crimson Lights. The cup of coffee she received from Sharon proved to be unexpectedly satisfying because it included a relay of information learned from Nick (Joshua Morrow) about the cash he’d found while doing bathroom refurbishing.

The resulting confrontation Phyllis has with Chelsea will quicken the write-out storyline for Egan’s character. At the same time, Y&R fans are expecting some type of open revival of the Christian (Jude and Ozzy McGuigen) paternity issue.

It would seem appropriate to directly address what has been a looming matter during the past few months as Egan leaves. Morrow’s character seems destined to have his heart broken by the certain departure of his significant other and possibly, in learning that Christian is actually Adam’s son.

The Bold and the Beautiful Spoilers Tuesday, February 6: Wyatt Suspicious Of Katie – Liam Struggles – Romance In The Air