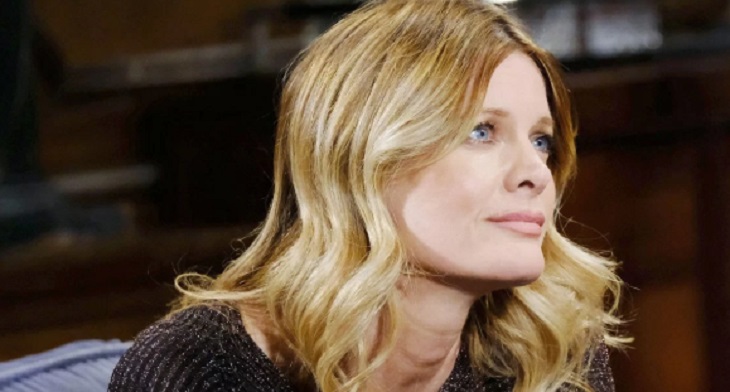 General Hospital spoilers tease that Nina Reeves (Michelle Stafford) may have a marriage – or, maybe a remarriage – in her future! She caught the bridal bouquet at Curtis (Donnell Turner) and Jordan Ashford’s (Briana Nicole Henry) wedding! Will she eventually remarry Valentin Cassadine (James Patrick Stuart) or possibly someone new?

Valentin has certainly been trying to win Nina back on General Hospital, although as usual going about the wrong way; they both still love each other, but Valentin is Valentin, and he doesn’t seem to be able to change his self-confessed twisted ways of trying to fix things.

He looks for Nina’s long-lost daughter to heal her mother heart, and comes up with Sasha Gilmore (Sofia Mattsson), while still a close relative according to the DNA tests taken, still not Nina’s true child. This is the one thing that will keep Nina from taking him back; lies, no matter how noble the reason for telling them!

Of course, there’s always the possibility that someone new could come into Nina’s life who could sweep her off her feet and be the real “Mr. Right”. Eligible bachelors on GH’s current canvas are becoming fewer, but there is a slight possibility she and Peter August (Wes Ramsey) could be drawn together and create one soapy two way triangle.

Can you imagine Peter competing with Valentin for Nina and Nina competing with Maxie Jones (Kirsten Storms) for Peter all at the same time? It’s even possible Lulu Falconeri (Emme Rylan) could be drawn into the mix!

Dr. Hamilton Finn (Michael Easton) is occupied with Anna Devane and possibly preoccupied with Hayden Barnes (Rebecca Budig) as well, but it could be interesting if Finn and Nina got together….and very strange if Nina never picks up on his resemblance to her late ex-husband Silas Clay (also Michael Easton)!

Harrison Chase (Josh Swickard) and Michael Corinthos (Chad Duell) would be way too young. Julian Jerome (William DeVry) is single but he and Nina have an uncomfortable past of his hiring her to ruin Crimson so he could use it as a tax write-off, when instead she rescued and reinvented it!

Maybe General Hospital will bring on a new soap hunk to romance Nina. Keep watching GH and checking General Hospital spoilers frequently to see whether “Valentina” is reconciled down the line, or someone new comes to capture Nina’s heart!