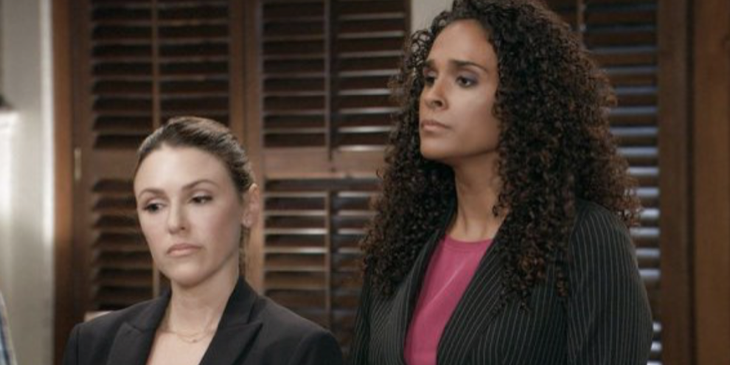 General Hospital spoilers tease that Jordan Ashford (Briana Nicole Henry) will have some bad news for DA Margaux Dawson (Elizabeth Hendrickson) soon. Jordan is not really keen on the idea of trying to prosecute Mike Corbin (Max Gail) for a cold case crime anyway, given his advanced age and Alzheimer’s diagnosis, but Margaux just keeps pushing and pushing.

Margaux is really after Sonny Corinthos (Maurice Benard) but taking down his family and friends one by one seems to be icing on the cake for her! She already came after Carly Corinthos (Laura Wright) and made sure she did a stint in Ferncliff if not Pentonville or worse, although that prosecution kind of backfired on her.

Jordan has a positive I.D. on the body buried under Charlie’s Pub.But will she be able to link it to Sonny or Mike? An all-new #GH starts RIGHT NOW on ABC! pic.twitter.com/br4Cmjji3O

Margaux is rapidly making her mark in Port Charles not only as a tough, ruthless district attorney, but with her push to tie Mike Corbin to the murder of her father and put him in prison she is also gaining a not necessarily good reputation as being cold and heartless!

She seemed shocked when the bones from under Charlie’s Pub came back as her long lost father’s, but from what she had previously told Drew Cain (Billy Miller) about her childhood, she would have been barely old enough to remember her father when he disappeared! Perhaps the shock on her face was because she didn’t really know her father, and her mother painted a rosy picture of him, and learning that he was a defense attorney for a mobster burst her darling daddy bubble!

There is a more than even possibility that the bad news Jordan brings Margaux is that there is no evidence revealed to tie Mike to the crime. The gun hasn’t been found yet, only the skeletal remains of the shooting victim, which only revealed Vincent Marino’s own DNA. Plus, while Mike may indeed have known Charlie Delaney, there’s nothing to tie him to Port Charles during the time of the murder.

Jordan and Margaux both dated the crime as having happened around thirty years ago, and Mike didn’t show up in town until around ten or twelve years later, after Sonny did. If and when the gun is found, there may or may not be viable DNA or fingerprints on it to tie either Mike or Sonny to the crime, since if Sonny was too young and green to know to wipe down the gun, Mike surely would have!

The Young and the Restless (YR) Poll: Will Sharon and Nick Make It To the Altar?

The Young and the Restless Spoilers: Nick And Sharon Plan Big Confessions, Billy Gets Out Of Control