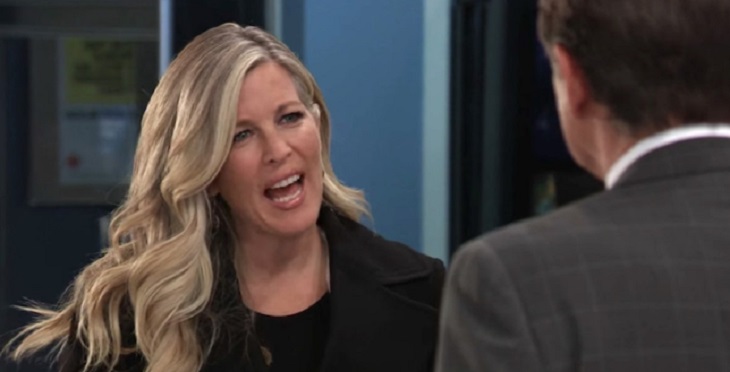 Carly is also a thorn in the side of Ava Jerome (Maura West) and Ryan won’t have anyone upsetting his goddess!  General Hospital spoilers indicate that he made his intentions for Carly clear when he said Ava won’t pay, but Carly will!

Felicia will still be on Ryan’s list of unfinished business, but Carly will come ahead of her because of Ava’s comments to him about Carly paying for what she had done to Ava! Plus, General Hospital spoilers show Carly is an increasing threat to Ryan’s continued masquerade as his brother Kevin, because she’s even found out that her old Ferncliff neighbor she’s so concerned about is named Wilson!

Of course, if Carly compares notes with Felicia or anyone else who knew Ryan went by the name “Todd Wilson” in Texas, Ryan will be busted for sure! It will be hard to believe, since everyone assumed that Ryan died in the funhouse explosion.

But, with more and more people close to Kevin realizing how not Kevin-like “Kevin’s” personality and actions have become, and how suddenly the change happened, the only missing piece of information that could blow the case (and Ryan’s life) wide open is that Ferncliff has a patient named Wilson!

Ryan knows that Carly told her husband Sonny Corinthos (Maurice Benard) about “Wilson” so he would have to be extraordinarily careful about killing Carly and making sure to leave no clues or evidence.

Sonny probably already has his men keeping an eye on Carly on General Hospital, because of the serial killer threat, and also because the killer tried to frame her one time already, for Mary Pat Ingles’ (Patricia Bethune) murder.

General Hospital Rumors: Franco Cracks After Kiki’s Death, Turns To The Dark Side To Take Ryan Down @celebratesoaps https://t.co/XHpqAnk161 #GH

Ryan definitely doesn’t want a cement jacket and a deep river dive, and for this reason, a kill attempt of Carly will probably not succeed! Ryan will have to find another way for Carly to pay besides with her life! Stay tuned to GH and keep checking General Hospital spoilers frequently to see the latest developments!