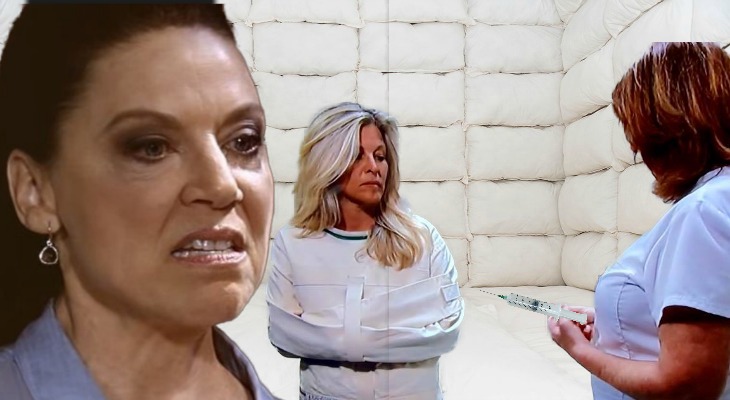 General Hospital (GH) reveals that Liesl (Kathleen Gati) has been arrested for kidnapping and held for mental evaluation. The judge remands her to Ferncliff because she is considered a flight risk. Liesl meets Mary Pat (Patricia Bethune) and helps Carly (Laura Wright).

Mary Pat And Dr. Lasaris Are Out Of Hand

With Kevin (Jon Lindstrom) visiting Laura (Genie Francis), Mary Pat and Dr. Lasaris (Casey Biggs) are running over the Ferncliff patients, especially Carly. Mary Pat has warned Carly of Dr. Lasaris’ plans for her. Carly needs someone on the inside to save her and Jason (Steve Burton) can’t be it. Could Sonny (Maurice Benard) have a secret weapon against Mary Pat in Liesl?

Sonny And Jason Have Dealt With Liesl Before

In their search for Faison (Anders Hove), before Nathan’s (Ryan Paevey) death, Sonny and Jason spoke with Liesl. Liesl can no longer use Nathan to threaten Sonny and Jason. Sonny And Jason need help to protect Carly. Liesl being at Ferncliff could benefit both her and Carly. Sonny has connections that could help Liesl once she is released. Liesl is a doctor and could save Carly. Sonny and Jason could influence Liesl by offering to help her if she helps them. Sonny and Jason may promise to help Liesl escape Port Charles and prosecution in return for her protecting Carly.

Mary Pat Has Met Her Match

Mary Pat is a bully, but she’s no match for Liesl. Liesl has spent years dealing with Faison. Mary Pat doesn’t compare to Faison. Mary Pat will certainly live to regret having Sonny Corinthos and Liesl as enemies. Mary Pat certainly deserves a hardy dose of her own medicine. If Liesl can deal with Anna Devane, Liesl can certainly take on Mary Pat and win. Carly gave Mary Pat one sedative, imagine Liesl having free reign with her.

Liesl needs to be there for her grandson. It’s obvious that Liesl has had a mental break. Hopefully, after treatment, Liesl can be the grandmother James deserves. Liesl deserves the right treatment, and not what Dr. Lasaris is issuing to others. Between Liesl and Carly, hopefully, Mary Pat and Dr. Lasaris will be taken down.

Soon both Carly and Liesl may be back in society with their families and Ferncliff will be a bad memory. Sonny and Jason will have a new ally and James will have his grandmother. Hopefully, Mary Pat will be a Ferncliff patient right where she belongs.

General Hospital Spoilers: Margaux’s Past To Be Revealed

The Young and the Restless Spoilers: Will Sharon Pull The Plug On Her Relationship With Nick?