General Hospital RUMOR: Drew Teams Up With Margaux To Take Down Jason Morgan and Sonny 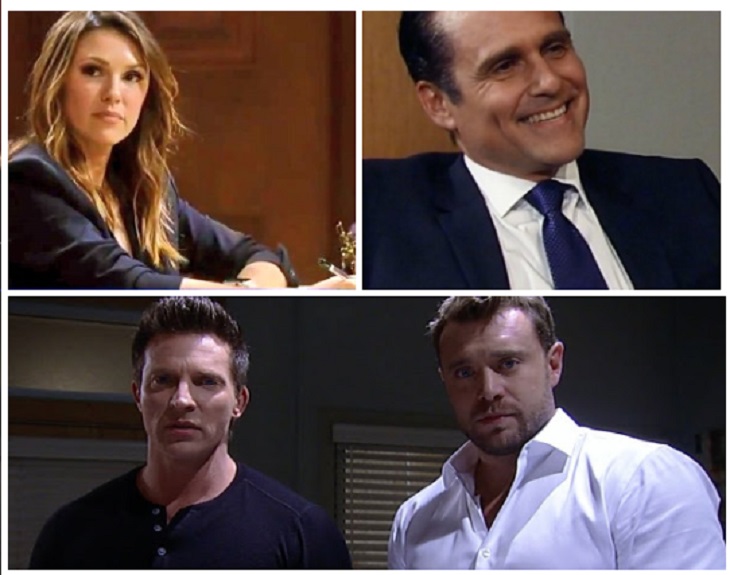 Latest Twitter rumors suggest that General Hospital’s  Drew (Billy Miller) will Team up with Margaux (Elizabeth Hendrickson) against Sonny (Maurice Benard) and Jason (Steve Burton).  Drew has mentioned using Jason’s memories against him before, will he go through with it for revenge?

Drew’s ominous message to Liz about Jason’s memories foreshadowed this.

Drew has already told General Hospital’s Liz (Rebecca Herbst) that he has Jason’s memories and could go to the authorities and take Jason down.  Drew obviously hates Jason and has from the first time he heard his name.  Drew’s hatred has become much worse since the realization that he was not Jason Morgan.

There is no concrete evidence as to why he hates Jason so much, but it’s obvious that he does.  Drew has said more than once that Jason should have stayed gone, this could grant him his wish.

Drew Didn’t Want To Be A Part Of Sonny’s Business Anyway.

Drew made it plain before he bought Aurora, that he wanted no part of Sonny or his business.  Drew asked by Sonny and Carly (Laura Wright) to keep their distance from he and Sam because of the mob connection.  Drew further holds it against Sonny that he immediately knew Jason when he returned.  Drew hated that Sonny trusted Jason to take care of Sam as well.

The Body In The Foundation of Charlie’s

Let’s assume that the body in the foundation of Charlie’s is discovered.  General Hospital’s Jason is helping Sonny to try and find the body which would make him an accessory after the fact. Jason didn’t know about this body when the memory mapping took place.

Drew would have to overhear something or be told by Margaux or Julian (William DeVry).  Rumors are circulating that Julian will find out and use the knowledge against Sonny so maybe Drew and Julian will work together.

Margaux Has An Issue With Sonny Too

There is also the possibility that Margaux is a relative of Joe Scully (Robert Miano) and that is why she is after Sonny.  No other crime has ever stuck when it came to Sonny, however, could she have had knowledge of Sonny’s role in burying this body.  Maybe Margaux knows that Sonny didn’t kill the man but buried him and plans to convict him of the murder anyway for revenge.

However, this plays out, Margaux taking on both Sonny and Jason, especially with Drew’s help, can only end badly.  Usually, it ends badly for the person trying to take Sonny and Jason down.  Stay tuned to General Hospital weekdays on ABC to see how this turns out.

MUST WATCH The Bold And The Beautiful Preview Video Wednesday July 11: Maya Suspicious Of Xander