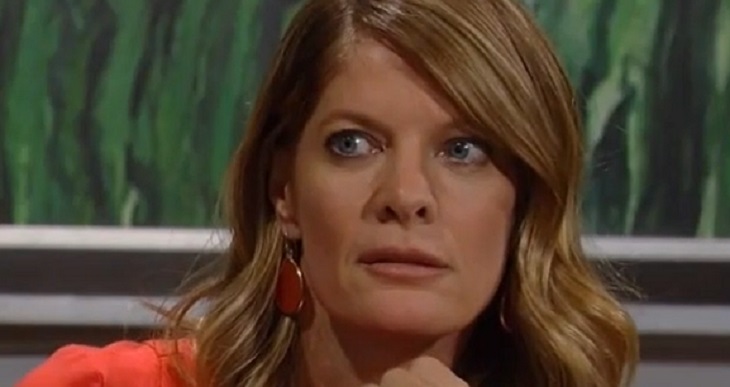 “General Hospital” spoilers for Wednesday, July 11, tease that Nelle (Chloe Lanier) will have the prenup on her mind. Michael (Chad Duell) really threw her for a loop with that shocker. Nelle probably thought marrying Michael would mean easy money, even if they split up later. Now she’ll have to reevaluate a few things.

Nelle will chat with a lawyer and give Michael updates afterward. Will she agree to sign the prenuptial agreement or propose an alternative? Whatever the case, Nelle will continue to have doubts thanks to Chase (Josh Swickard). She may wonder if her future really lies with Michael.

Other “General Hospital” spoilers say Finn (Michael Easton) will be ambushed by his brother. Chase will track Finn down at GH and insist on having a crucial conversation. He’ll want to talk about his mother and their father, so this is undoubtedly about the upcoming birthday visit. Perhaps Chase will push for peace once Gregory (James Read) and his wife arrive in town.

Over with Maxie (Kristen Storms), she’ll get busted by Lulu (Emme Rylan). It looks like Maxie will be on the hunt for something. She’ll be digging around a pile of junk when Lulu appears. Maybe Maxie planned to meet Lulu, but got caught up with what she was doing. Regardless, Lulu should be happy to pitch in.

On the phone, Valentin (James Patrick Stuart) will deliver more instructions. He’ll keep someone focused on what’s most important, which could be searching for Nina’s (Michelle Stafford) secret. “General Hospital” spoilers say Valentin will get on Nina’s bad side, so his investigative efforts may leave her riled.

Drew (Billy Miller) will also seek the truth from Nina. Once he points out that she’s been hiding something, Drew will urge Nina to make a confession. He’ll do his best to break her, but Nina’s lips will probably be sealed – at least regarding the real story. Nina may make up an excuse to appease Drew, but it’s doubtful she’ll share anything about Peter (Wes Ramsey).

Speaking of Peter, he’ll try to rattle Liesl (Kathleen Gati) on Wednesday. Peter will contend that the time has come to make a choice. He’ll suggest that Liesl can have revenge or her freedom, but not both. Dr. O will likely urge Peter to zip it, but she’ll definitely be concerned about her tricky situation.

It sounds like some exciting moments are ahead in Port Charles. We’ll keep you posted as other news and rumors emerge. Stick with ABC’s GH and don’t forget to check Soap Opera Spy often for the latest “General Hospital” spoilers, rumors, updates and news.

The Bold and the Beautiful Spoilers Wednesday, July 11: Sally Desperate To Clear Her Name – Xander’s Hiding Something

The Young and the Restless RECAP Tuesday, July 10: Sharon And Girls Panic – Billy And Summer Scheme