General Hospital RECAP Wednesday, May 30: Peter Wants Drew To Break Him Out Of Jail 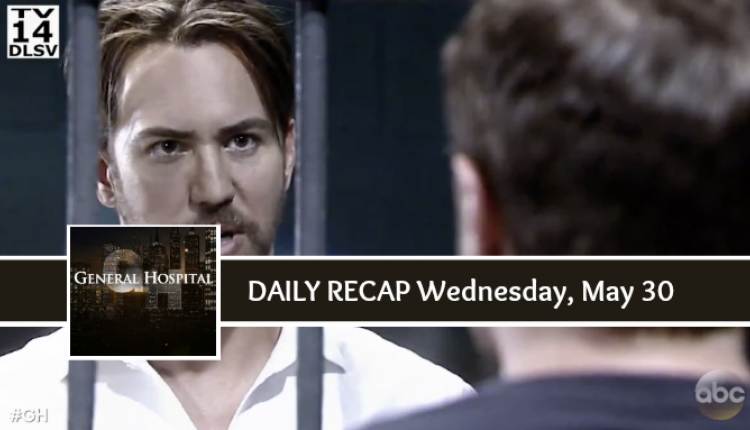 “General Hospital” (GH) recap for Wednesday, May 30, 2018, reveals Jason (Steve Burton) is on the phone telling Spinelli (Bradford Anderson) to go back to the first of the year and find something on Nelle (Chloe Lanier). Jason doesn’t like that Carly (Laura Wright) is in Pentonville until trial. Kim (Tamara Braun) shows up at Jason’s door, she wants him to stop Drew (Billy Miller).

Jason also tells Kim that he would react the same way. Kim tells Jason that the more she talks to him, the less he is like Drew. Kim needs to know what would convince Jason not to do this, the people he loves would work. Jason suggests that maybe Drew can hear her like he hears Carly. Later, Sam shows up and needs Jason’s help as Kim runs into Drew who informs her he is going through with the procedure.

General Hospital’s Sam (Kelly Monaco) and Curtis (Donnell Turner) meet at the gym, he wants to know how she figured out Peter’s secret. Sam tells Curtis that Anna (Finola Hughes) threatened to kill Jason over Peter (Wes Ramsey). Sam tells Curtis Anna is Peter’s mother. Sam tells Curtis the WSB is trying to get their hands-on Peter. Sam thinks Drew needs time to rebuild his life and she needs to rebuild hers. Curtis suggests Sam partner up with him. Sam questions if Curtis is trying to recruit her before she becomes his biggest competitor. Curtis and Sam throw around names for a business. Sam has to talk to Drew and finalize things first, and she has filed to go back to her original name back.

Peter Wants Drew To Break Him Out Of Jail

General Hospital’s Liesl (Kathleen Gati) shows up to see the baby as Nina (Michelle Stafford) is leaving a message for a divorce attorney. Nina is going to fill her in before she sees the baby. Nina tells Liesl that Peter is Heinrik (Wes Ramsey) and Nathan (Ryan Paevey) was shot because Faison went after Peter. Nina tells Liesl that Peter is in jail, and there’s more.

Nina tells Liesl that Anna is Peter’s mother. Liesl says Peter would have never escaped Faison if he had known who his mother was. Liesl gets to see the baby finally and is thrilled that his name is James. Liesl promises the baby that he will never have anything to fear as long as she is alive.

Valentin Wants Alexis As His Lawyer

General Hospital’s Valentin (James Patrick Stuart) shows up on Alexis’ (Nancy Lee Grahn) doorstep. Valentin wants Alexis’ help putting his assets in a trust for Charlotte (Scarlett Fernandez). Alexis questions why Valentin wants her, they are family. Valentin and Alexis talk about their family. Valentin offers to tell Alexis everything she wants to know about Mikkos (John Colicos). Alexis wants to know how Valentin found all this information. Valentin tells Alexis that he has done the research.

Valentin tells Alexis’ sometimes people are drawn to what hurts them the most and ask if she agrees. Valentin tells Alexis that he will help if she wants to know, she tells him to bring her the portfolio so she can take care of the assets. Alexis tells Valentin that this move isn’t going to get him back on Nina’s good side, amends are made by actions. Meanwhile, Curtis shows up at the hospital and finds Nina crying, he wants to know what is going on. Nina tells Curtis that her husband turned out to be what everyone told her he was.

General Hospital’s Liz (Rebecca Herbst) asks Kiki (Hayley Erin) again about Dr. Bensch (James DePaiva). Kiki tells Liz that Bensch told her to meet him in his hotel room if she wants a better evaluation and this isn’t the first time. Kiki tells Liz about the gifts etc. Kiki thought the kiss was a misunderstanding. Bensch started treating her differently after she turned him down.

Kiki tells Liz about the draft Bensch showed her today. Liz says Bensch is about to get what’s coming to him. Kiki tells Liz that she will be labeled a trouble maker because of Bensch. Liz uses her rape to point out to Kiki that Bensch is controlling her. Liz tells Kiki whatever she decides she will support her but by staying quiet Dr. Bensch will feel like he can keep doing this. Liz doesn’t want Kiki to carry around the guilt of staying silent. Liz believes Kiki and will be by her side every step of the way.

WATCH: Lucas gives Julian a reality check about the difficulties he and Brad are facing. @WilliamdeVry1 @ryancarnes1 #GH55 pic.twitter.com/gieEDkGqaf

General Hospital’s Lucas (Ryan Carnes) shows up at Julian’s, he needs help with his birth mother. Julian (Willian DeVry) questions if Lucas thought he would turn him down. Lucas tells Julian he did ask him to keep his distance. Lucas tells Julian that the birth mother can still change her mind at any time and reveals his fear of not getting the baby. Julian doesn’t want to see Lucas get hurt and wants him to talk to Alexis. Lucas tells him not to watch, this is his and Brad’s family and leaves. Alexis is looking at her father’s photo when Julian calls, she ignores him.

The Young and the Restless Spoilers Thursday, May 31: Nick Wants to Leave Town with Sharon – Hilary Surprises Devon – Jack’s Rejected