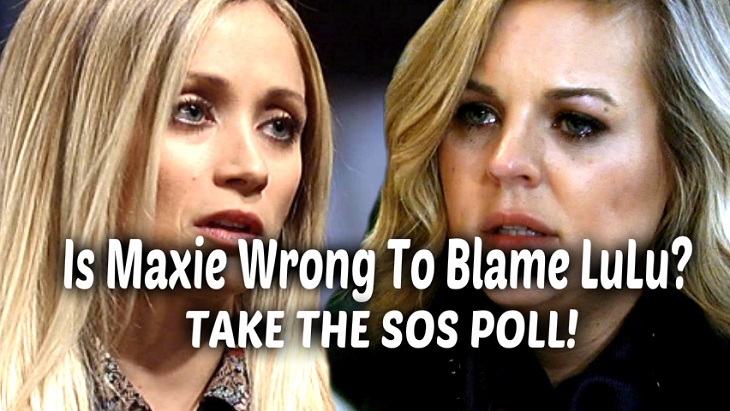 General Hospital’s Maxie West (Kristen Storms) wanted to take out a restraining order to keep her former best friend Lulu Falconeri (Emme Rylan) away from her.  Maxie is firmly convinced that Lulu is the reason her husband Detective Nathan West (Ryan Paevey) was murdered.  General Hospital fans are torn on this subject. Is it wrong for Maxie to blame Lulu and should she forgive her best friend?

There are those General Hospital fans who believe that Lulu is certainly responsible for Nathans death.  They feel Lulu was selfish in her attempt to attempt to further her career as a Journalist when she had just started working for the Port Charles Press.

Lulu acted without thinking about how her article would affect Maxie and her family.  She convinced Nathan it was in his best interest to draw General hospital Cesar Faison (Anders Hove) out into the open so that she could get an interview and the PCPD could arrest him.  Lulu never gave one thought to how dangerous this man really was.

Other General Hospital fans believe Maxie has been too harsh with her best friend. They believe Maxie should remember some of the things she has done to Lulu and been forgiven for.  Maxie miscarried the child she was carrying for Lulu and lied to her when she became pregnant with General Hospital’s Damien Spinelli’s (Bradford Anderson) child; misleading Lulu into thinking she was still carrying her baby.

Lulu eventually forgave Maxie. Fans say Maxie should look to the real culprit Peter August (Wes Ramsey). He is the person who agreed to publish the article Lulu wrote; instead, Maxie is developing a friendship with him and ignoring the fact that if not for Peter, Lulu’s article would never have been published. Fans point to the fact that Maxie is going to need her best friend once Peter is revealed as Faison’s son Henrik.

So, is Maxie wrong to blame Lulu for Nathans death? You decide, and please be sure to vote in our Soap Opera Spy poll right here.