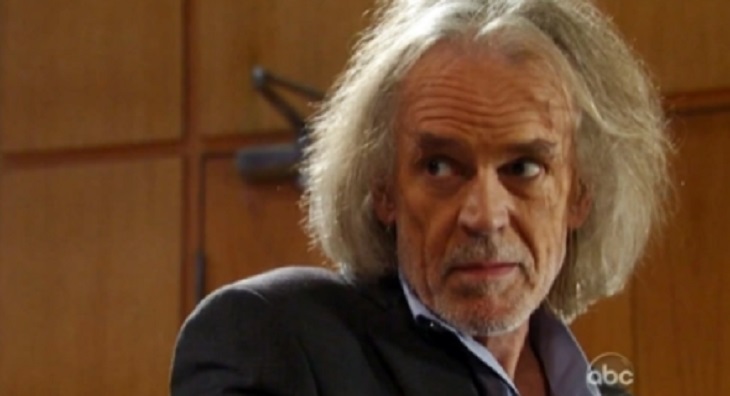 Last month Faison appeared as dead as dead can be, after all his brain is in a jar!  And, it was revealed that the villain was actually dying of the genetic disease Huntington’s.

Naturally, Faison’s offspring began panicking and fearing that they too had inherited the deadly disease.  Peter August [Wes Ramsey] paid Dr. Griffin Munro [Matt Cohen] and ordered the tests.  Maxie Jones [Kirsten Storms] feared that her and Nathan’s [Ryan Paevey] baby had inherited the disease as well and had tests done.

General Hospital spoilers tease that both Peter and Maxie get great news, and the test results came back negative.  If neither of them inherited the genetic disease, either they got very lucky, or the brain with Huntington’s Disease doesn’t actually belong to Faison and he’s still alive.

You have to admit that its odd that 0/2 of his offspring have not contracted Huntington’s.  Rumors have been floating around for several weeks now that Faison is not actually dead.  After all, how many times have we thought he was a goner and he popped back up like a cockroach?

Then again, maybe Cesar is really dead, and the Huntington’s Disease mystery is proof that Peter and Nathan are NOT his sons

What do you think GH fans?  Is it possible that Faison is still alive and doesn’t have Huntington’s Disease?