General Hospital Poll: Do You Want Drew And Franco To Be Friends? 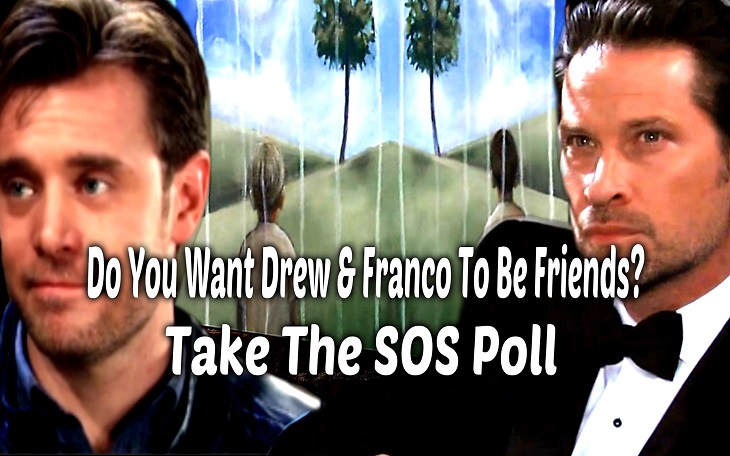 General Hospital Drew Cain (Billy Miller) and Franco Baldwin (Roger Howarth) have teamed up to find Betsy Frank (Deborah Strang) and discover the truth about what really happened when the two men were children. Strange bedfellows can sometimes end up being friends.  Should Franco and Drew form a friendship from this alliance?

General Hospital fans of Franco feel it’s about time he made a friend in Port Charles and point to Drew as a great candidate.  They point to the fact that Drew was Franco’s boyhood buddy and his protector; known as Andy back then.

Franco has been working with General Hospital’s Kevin Collins to help him jog his childhood memory; fans, as well as Franco, now believe that he was not responsible for pushing Drew down the stairs and think Drew needs to give their boyhood friendship another try. Since Drew has been able to co-exist with Franco, and now that

General Hospital’s Jim Harvey has trapped them underground, they must join forces to survive.  In the end, this might bring them closer together and Drew, despite not having any memory of Franco, may gain some respect for the man.

Other General Hospital fans say it is not possible for Drew to form a friendship with Franco because he still carries General Hospital Jason Morgan’s (Steve Burton) bad memories of him.  Drew does not remember Franco as a child; he remembers the awful things he did to his wife Sam Cain (Kelly Monaco) and to General Hospital ‘s Michael Corinthos (Chad Duell).

Fans say that even if Drew were to regain his memory he would not necessarily remember Franco since they were only three years old when Betsy sent him the foundling home.  This could also cause some resentment that would hinder any Friendship.

What do you think? Should Drew and Franco rekindle their childhood friendship? Could this alliance bring them closer together? You decide, and please be sure to vote in our Soap Opera Spy Poll.

Days Of Our Lives Dropped Unexpectedly By Network