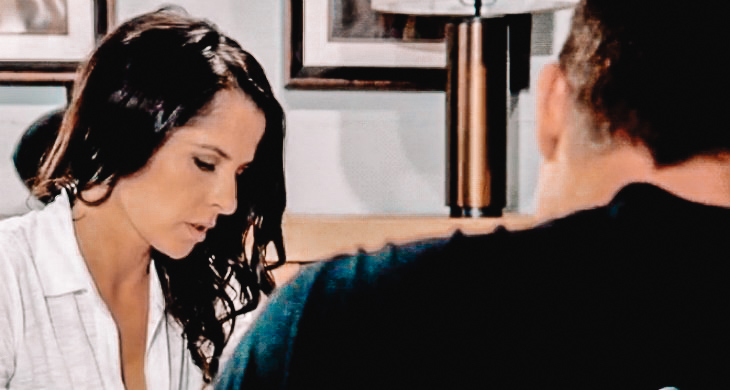 General Hospital (GH) Sam (Kelly Monaco) and Jason (Steve Burton) are moving at the pace of molasses but were their conversation about not stepping back an invitation for him to pursue her more aggressively?

When Sam and Jason reunited in 2009, Carly (Laura Wright) had to tell him not to let Sam back away. Carly explained to Jason that Sam was scared and that she was going to start pulling back. Jason took Carly’s advice, and it worked out great for him and Sam. However, if Jason hadn’t changed his tactics, they may have never gotten back together then.

Sam Has Taken Forever To Make Up Her Mind

It has been months since Sam decided she needed time to make up her mind. Now Sam wants to be with Jason but seems to want to take things slow still. Sam seems to want Jason to make romantic gestures toward her now. Maybe Jason needs to invite Sam out for a ride on his bike. He could also enlist Carly, Molly (Haley Pullos), or Kristina’s (Lexi Ainsworth) help with something romantic. Maybe a simple amount of family time would work, and he should spend more time with Sam and Danny (T.K. Weaver) together. Jason can easily let Sam know what she needs if he is around more to do so. Maybe Sam needs reassurance that Jason isn’t going anywhere.

The intensity , the chemistry WHAT IVE BEEN WAITING FOR 💗🙌🏼 #gh #jasam pic.twitter.com/lQSIx6tDQG

Sam’s house is not the place to get any privacy. Alexis (Nancy Lee Grahn) has no business at Jason’s apartment. Jason could cook Sam a romantic dinner and invite her over to his place. Jason knows Sam well enough to plan this dinner and give them some time to connect. Jason and Sam could even let Monica (Leslie Charleston) watch the kids and go to Sonny’s island for some privacy. Alexis even showed up in Switzerland so he may need to get a little creative in his search. Maybe a trip to Mexico or going out of town on a case together. Carly could even set them up with a suite at the MetroCourt.

Sam Could Ask For Carly’s Advice

Maybe Sam will go to Carly and suggest she help with some romantic plans. Carly can read Sam pretty well. If Sam discusses this with Carly, she will have some idea what Sam needs and can guide Jason in arranging it. Will Carly end up helping to reunite Sam and Jason after all the years of trying to keep them apart?

It has been six years since Sam and Jason have been together. It is obvious that a reunion is what they both want. Sam and Jason need a push in the right direction so they can reunite.

The Young and the Restless (YR) Poll: Is Shick Over? – Sharon and Nick’s Fate Appears Sealed