Death By Appointment? How General Hospital Ryan Will Lure His Victims? 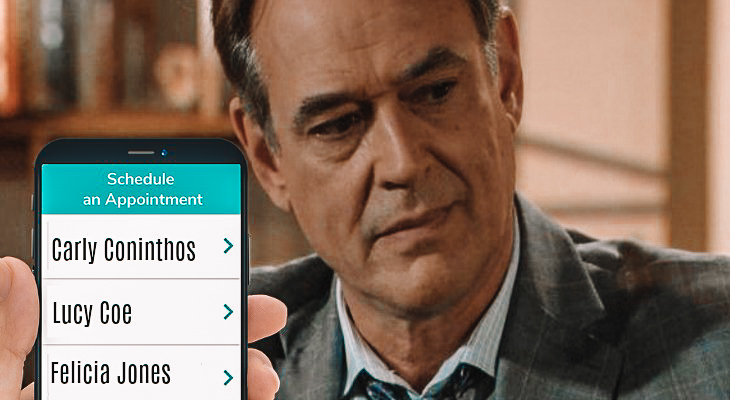 Laura’s homecoming interrupted his quite apparent plans to strangle Lucy with an electrical cord, but Ryan never had a standard MO (modus operandi, or mode of operation). For instance, when he attacked Steve and Audrey Hardy (John Beradino, Rachel Ames) it looked like he had attempted to beat them to death, leaving the Hardy’s living room like a tornado had gone through it! These scenes aired on Friday, May 28, and Monday, May 31, 1993.

Something’s not right with Kevin… and it isn’t a cold. Can Laura see through Ryan’s act? A thrilling, new #GH starts RIGHT NOW on ABC! #GH55 pic.twitter.com/SODLyNWzgF

Just in the last few days on GH, Ryan has encouraged Carly Corinthos (Laura Wright), Franco Baldwin (Roger Howarth) and Peter August (Wes Ramsey) to make appointments with him, and had invited Lucy to his home to bring him the “healing chicken soup”!

Other General Hospital spoilers tease that he will set Franco up to take the hit for some of his crimes, since he kind of likes Franco, seeing himself in him, and possibly give Peter poisoned pill samples. Carly is probably the worst threat to him now, because she saw him in Ferncliff in the hall and is concerned about her neighbor who was tapping SOS in Morse Code and caught Ryan as Kevin doing it on a table at the Floating Rib.

She could expose him for who he is, as well as Franco or Peter if they study up on his gruesome history. Felicia Scorpio (Kristina Wagner) is his most important potential victim…after all, she spurned his attentions and rejected his “love”! When she came back from Texas where she witnessed him, as Todd Wilson, murder his wife Gloria, she came back to Port Charles and was immediately attacked by Ryan. He put a rag soaked with something to knock her out on her face, and she woke up with amnesia. That way Ryan could romance her and she wouldn’t remember him. He could try this tactic or something similar again!

Ryan could kill or attempt to kill his victims in Kevin’s office in GH, via poisoned pill samples, but it’s doubtful he will take that route. Killing is exciting to him, and sending someone away with poisoned pills is a merciful, quiet death that would bore him, not to mention he couldn’t watch them die. To say Ryan is dangerous would be the understatement of the century! Keep watching GH and checking General Hospital spoilers frequently to see if he will be unmasked before he can do any real damage, or if GH is gearing up for a serial murder mystery for November sweeps!