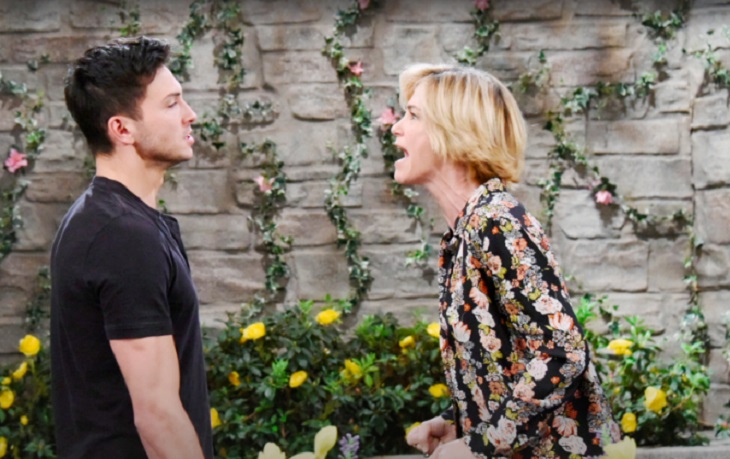 “Days of Our Lives” spoilers for Friday, July 27, tease that Jennifer (Melissa Reeves) will spill her suspicions to Brady (Eric Martsolf). She’s been investigating the planted drugs, so she wanted to give him some updates. Jennifer knows someone who cared about Brady must’ve put this in motion. She insisted this person was desperate to keep Brady and Tate (Colin and Kyle Schroeder) together.

Jennifer will feel like they can only draw one conclusion here. She may put the blame on Eve (Kassie DePaiva), Victor (John Aniston) or a combination. Jen could suggest that Vic and Eve made this a team effort. Brady might buy Victor’s part in the plan, but it’s doubtful he’ll believe Eve had anything to do with it. He has total faith in the woman he loves.

Elsewhere, Victor will fill Eve in on Jennifer’s progress. He’ll contend that Jen’s getting awfully close to the truth. Victor may urge Eve to get her story straight and prepare for Brady’s blowup. If she wants to keep Brady in her life, she’ll have to be ready for anything.

For now, “Days of Our Lives” spoilers say Eve will keep her relationship intact. She’ll come up with a few tricks to preserve her romance, but more mayhem’s ahead. DOOL fans can expect a shocking encounter for Eve on Friday. She’ll bump into Ben (Robert Scott Wilson) and lost all control!

“Days” viewers know that Ben killed Eve’s daughter, Paige (True O’Brien). She was just an innocent college student, so it was certainly a sad demise. Eve will never fully heal from that loss, so she’ll rip into Ben with everything she’s got. She’ll make it clear that he’s a monster for what he did to her only child.

After Eve’s verbal attack, she’ll push Ben down and go after him physically. “Days of Our Lives” spoilers say Eve will put Ben in a chokehold and attempt to strangle him. Fortunately, Eve won’t actually commit murder. Ben will escape with his life, but he’ll definitely have a lot to think about after this. Once he sees how much pain he caused, it’ll bring Ben’s guilt to a whole new level.

Finally, Tripp (Lucas Adams) will want Ciara (Victoria Konefal) to be straight with him. Does she have feelings for Ben? Ciara might suggest that she doesn’t, but that would obviously be a lie. Anyone can sense the deep bond between them!

It sounds like another great episode’s on the way. We’ll keep you posted as other “Days” news and rumors emerge. Stick with DOOL and don’t forget to check Soap Opera Spy often for the latest “Days of Our Lives” spoilers, rumors, updates and news.