Days Of Our Lives RECAP Wednesday, July 25: Ted Sent The Letter To Will 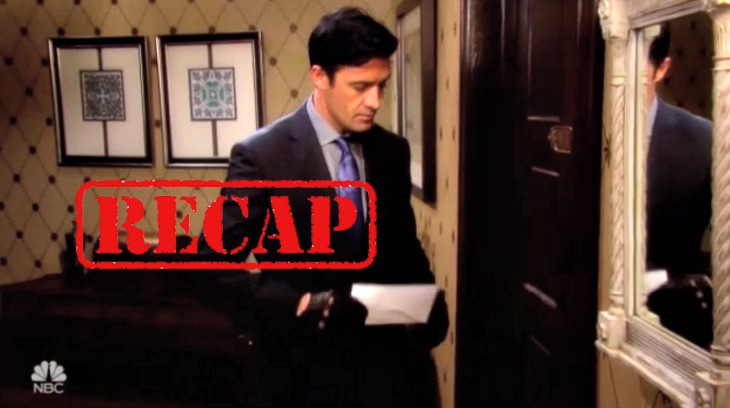 Days of Our Lives (DOOL) recap for Wednesday, July 25 reveals, Will (Chandler Massey) comes to see Sonny (Freddy Smith) to show him the letter.

Will Shows Sonny The Letter

Days of Our Lives’ Ted (Gilles Marini) and Ben (Robert Scott Wilson) talk about his case and the arson. Ted wants a phone number for Ben. Ben has nowhere to sleep tonight. Ben doesn’t have much money left. Ted gives Ben his card and warns him to stay out of trouble. Ciara (Victoria Konefal) comes to the park and meets Ben. Ben apologizes to Ciara again.

Ben hopes Ciara can trust him again. Ben tells Ciara he went after his medication. Ben says he came back and saw the fire. Ciara wants to believe Ben but has been hurt before. Ben tells Ciara he would never hurt her. Ben is sorry Ciara got dragged into this mess. Ciara offers Ben money for a hotel. Ben won’t take money from Ciara but they are square. Ciara goes home and begins reading an article. Ben is trying to sleep on a park bench.

Gabi Pretends To Be Concerned About Abby

Abby tells Gabi that she was dead set about the abortion. Gabi admits to sending Stefan to stop her. Abby tells Gabi that she thinks she’s lost Chad. Abby is sick Gabi gives her crackers. Gabi asks if the baby changes Abby’s feelings for Stefan. Abby tells Gabi what Chad said when he left. Gabi tells Abby that Chad is afraid she has feelings for Stefan. Abby doesn’t know if Chad believes her. Abby says she and Chad got through so much together. Abby doesn’t know how Chad can live with this. Gabi tells Abby to have faith in Chad. Gabi leaves Abby’s smiling. Abby texts Chad to ask if he’s coming home. Gabi goes to Chad and starts playing up to him.

Chad And Stefan Come To Blows

Chad asks Stefan if he has any idea how hard it is to be a father. Chad tells Stefan that Gabby isn’t real but Abby is. Stefan tells Chad Gabby lives on in Abby. Stefan mentions that Chad is drinking while Abby is home alone. Stefan tells Stefano’s (Joe Mascolo) photo about the baby. Stefan says his branch of the family will make Stefano proud.

Hope And Rafe Look For Clues

Days of Our Lives’ Hope (Kristian Alfonso) and Rafe (Galin Gering) want to take Ciara home. Ciara refuses and finds her own way. Hope is ranting about Ciara hiring Ben’s attorney. Rafe tells Hope that Ciara reminds him of her. Rafe thinks Ciara is wondering if she was wrong to trust Ben. Hope wants to go back to the cabin. Rafe tells Hope the work is done.

Rafe says IF Ben did this they don’t have enough evidence to prove it. Rafe wants to order take out and go over files. Hope wants to start with dessert first. Hope asks for the pharmacist’s statement. Rafe wants to check the pharmacy tapes. Hope thanks Rafe for his help. Rafe offers to call the pharmacy. Rafe tells Hope he loves Ciara.

Days of Our Lives Ted arrives at Kate’s (Lauren Koslow) room. Ted tells Kate he’s Ben’s attorney. Kate slaps Ted. Kate tells Ted that Ben tried to kill her grandson. Ted says Will is fine now. Kate argues against Ted representing Ben. Ted asks if it’s over for them if he doesn’t drop Ben. Kate doesn’t know but Will is blood. Ted apologizes for not telling her about Ben. Ted won’t drop Ben as a client. Ted turns to leave, Kate stops him. Ted thinks about slipping the letter under Will’s door.