The Bold and the Beautiful RECAP Wednesday, May 30: Bill Says He’s The Better Man For Steffy, Liam Calls Him Sick 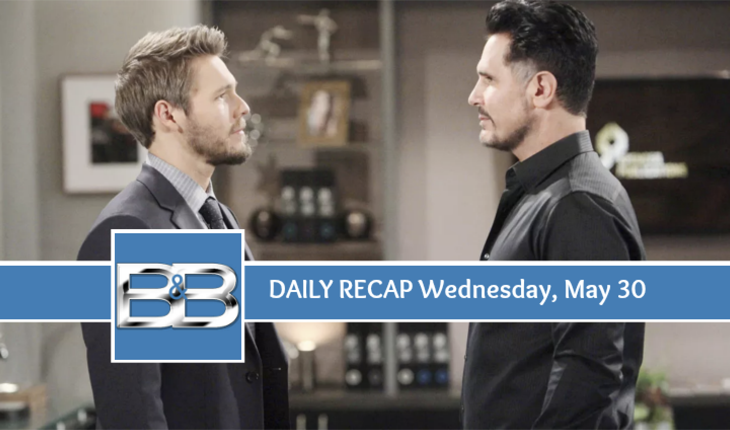 “The Bold and the Beautiful” (BB) recap for Wednesday, May 30, 2018 reveals that over at the cabin, Steffy Forrester Spencer (Jacqueline Wood) tells Liam Spencer (Scott Clifton) that he has been away from her and the baby too long and wants him to come home.

Steffy is glad that Liam knows the truth and tells him she does not have feelings for Bill Spencer (Don Diamont). Steffy don’t blame Liam for not believing her. Steffy says they can make things right. Liam tells her that even though the wedding didn’t happen today that Hope Logan (Annika Noelle) still wants to get married. Liam says Hope is the one that called off the wedding. Steffy says the truth changes everything and Hope needs to realize. Steffy begs him to not marry Hope.

Brooke and Ridge Argue Over Their Daughters

Inside at Brooke Logan Forrester’s (Katherine Kelly Lang) place, Hope Logan comes down the stairs and joins her mother and Ridge Forrester (Thorsten Kaye) and tells them she called off the wedding. Ridge thinks it was the right decision and that they should be grateful to Wyatt Spencer (Darin Brooks). Brooke is still upset that Wyatt stopped the wedding and didn’t tell Liam Spencer at a different time. Hope tells Ridge that her and Liam will still be getting married just not today. Hope is shocked when Ridge tells them that he has filled his daughter in on all the details. Brooke and Hope are furious that Ridge told Steffy to go to Liam. Hope takes off for the cabin. Brooke and Ridge argue over their daughters.

Over at Spencer Publications, Wyatt Spencer and Bill Spencer get in a heated argument about him telling the truth. Bill tells Wyatt that he made the biggest mistake of his life. Wyatt tells him he don’t regret at all telling Liam Spencer the truth. Bill tells Wyatt he screwed up and now everything is gone. Wyatt tells Bill that he didn’t want his stupid toys, he wanted his respect. Wyatt adds that he risked everything for his family and showed more loyalty then Bill ever has.

Bill insists that he will still be with Steffy Forrester Spencer and that Liam will still marry Hope Logan. Bill brings up his gifts to Wyatt and Wyatt tells him to take his stupid gifts back and throws the car keys. Wyatt tells him to take the stupid painting out of his office if he still has one and Bill tells him he doesn’t. Wyatt says he doesn’t even care anymore and that Bill has lost it. Bill tells Wyatt to get out. Wyatt says you’re done with me and I’m done with you.

Hope Heads To The Cabin

Back over at the cabin, Steffy Forrester Spencer wants Liam Spencer to leave from there and not rush into another wedding. Hope Logan shows up and Steffy tells her Liam is gone. Hope tells her she didn’t have to rush over there to Liam that he would’ve came and seen her. Steffy tells Hope if it weren’t for Bill Spencer today would’ve never happened.

Back over at Spencer Publications, Liam Spencer arrives to have a word with his father. Liam says there is the man that thinks he owns the whole city and everyone in it. Liam calls him out on tricking him and tells him he is sick for wanting to break up his granddaughter’s family. Bill calls Liam out on when he sees the first sign of doubt he abandons his wife and unborn child. He tells Liam that Steffy deserves better and a better man for her is him.

The Young and the Restless RECAP Wednesday, May 30: Jack Tries To Drink His Sorrows Away, Feels Betrayed