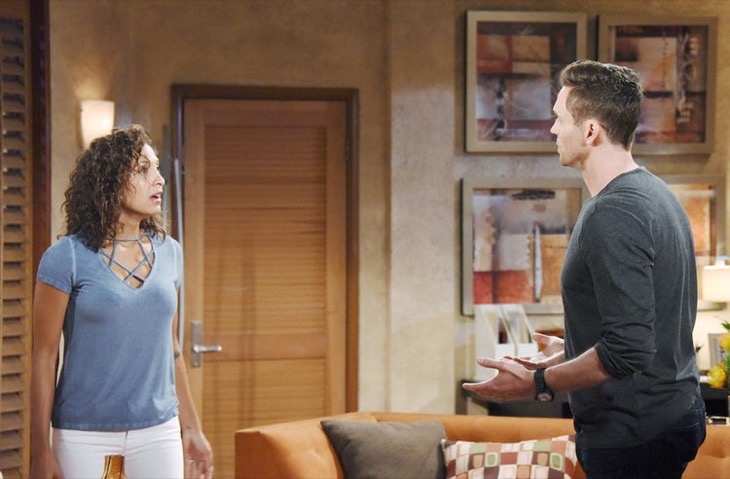 Dramatic developments interrupted Lily’s (Christel Khalil) divorce plans on ‘The Young and the Restless’. So the question isn’t who will Lily and Cane (Daniel Goddard) pair with next? Instead, it’s will they reunite now?

The currency of the Juliet (Laur Allen) storyline obviously impacts ‘Lane’s’ future. With whatever the full outcome of that situation, recent dialogue indicates that Lily hasn’t given up on Cane yet.

Cane was right to ask Lily where they stood after she woke him up in Genoa City Memorial Hospital’s waiting room while they were waiting for news about Juliet and the baby. Lily’s reply offered some respite for Goddard’s character and all who want to see this couple continue.

Charlie (Noah Alexander Gerry) was caught in The Underground’s office when a fire broke out last week. He, along with Mattie (Lexie Stevenson) and Reed (Tristan Lake Leabu) survived because of Billy’s (Jason Thompson) heroism. The experience allowed Charlie to gain perspective that he passed along to his parents at the divorce hearing.

Gerry’s character asked his mom if she still loved his dad. Her yes, along with Cane’s plea convinced Lily to tell Michael (Christian LeBlanc) to postpone the proceedings. Then Juliet walked in and Lily’s attitude instantly changed.

Juliet was sitting outside of the courtroom later when Charlie joined her. It’s good that he was, as Allen’s character collapsed. Charlie alerted his parents and all other characters, after which Juliet was rushed to the hospital and that end of the storyline played out.

Unexpected events often alter outlooks. Such was the case for Charlie. Viewers will learn whether Lily has seen enough to change her mind and reconcile with Cane.

Fans of ‘The Young and the Restless’ rightfully express their opinions on a regular basis. So, will Cane and Lily reconcile now that the Juliet drama has unfolded? Please vote in our poll below!