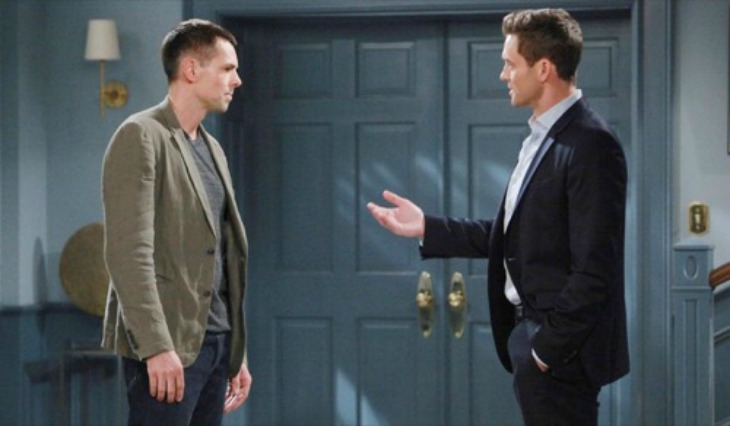 Billy (Jason Thompson) and Cane (Daniel Goddard) have rarely gotten along with each other on ‘The Young and the Restless’. But Billy’s move into the Chancellor mansion may enable the relationship these stepbrothers share to evolve a bit. Spending time together behind bars isn’t generally a time to bond, but this is a soap.

Change often happens whenever a new head writer’s work begins to be seen. That pattern continued when Mal Young’s team’s efforts premiered last month. One of the adjustments winks at the possibility that Billy and Cane might actually behave like functional brothers moving forward.

Another change has Billy and Jack (Peter Bergman) back together again. They made up as The Underground was burning. Both Abbott men returned to their dad’s home, but Thompson’s character only stayed the night and then went to his mom’s house. He and Jack are good. Billy just felt it best not to push it, which was smart.

Juliet’s (Laur Allen) genuinely serious condition actually forced Billy and Cane to agree. Juliet was surprised to see her former Brash and Sassy colleague when he arrived at the palace. Goddard’s character wasn’t sure why Billy was in the living room when he came home a short while later.

Juliet is well aware of the stepbrothers battles and didn’t want their rivalry to affect her soon-to-be-born son. So she said that she would be moving out.

Cane and Billy convinced Juliet that she didn’t need to leave and that they would behave themselves. Later, they didn’t. But their differences didn’t force both characters into the same jail cell.

After downing some beverages, Billy and Cane decided to plead their cases to the women they love. Billy burst into Phyllis’ (Gina Tognoni) condo, took a few swings at Jordan (Darnell Kirkwood) and was arrested. Meanwhile, Cane was pledging his love to Lily through the Ashby family’s locked front door. She never answered and he was arrested.

Related: The Young and the Restless (YR) Spoilers: Jack and Billy Reconcile – Combine To Fight Victor

Two brothers spent some time in Genoa City’s holding cell. New self-inflicted wounds applied to two guys who have more in common than they previously cared to admit. As of November 2017, they’ve finally recognized some similarities and have a chance to grow. Keep pushing forward Y&R.