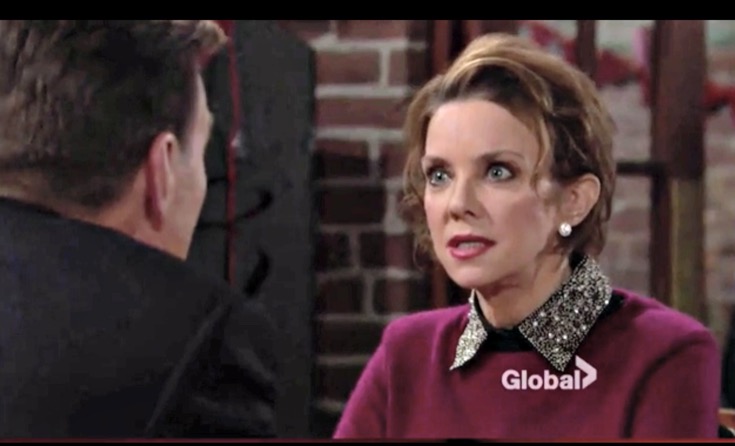 “The Young and the Restless” spoilers for Tuesday, February 7, tease that Nick (Joshua Morrow) will face an uncomfortable conversation with Victoria (Amelia Heinle). She’ll wonder what his status is with Chelsea (Melissa Claire Egan). Victoria is probably picking up on the sexual tension between them. She might ask what the holdup is.

Nick will explain that they’re just friends. They decided they shouldn’t risk ruining their bond by moving too fast. Victoria won’t see what the big deal is. She’ll note that Adam (Justin Hartley) is gone and it would be fine for Chelsea to date again. The same goes for Nick.

Tuesday’s Y&R preview video shows Victoria asking, “If you can both find a little happiness, would that really be so crazy?” Nick might gently tell his sister to butt out, but her words could start to sink in. Perhaps Nick will consider what a future with Chelsea would look like.

Other “Young and the Restless” spoilers state that Faith (Alyvia Alyn Lind) will decide she wants to come home. She’ll share the news with Sharon (Sharon Case) and suggest that she’d like to go back to her house right away. Faith must want to be with Sharon during this difficult time.

Unfortunately, some issues will emerge between Sharon and Nikki (Melody Thomas Scott). Things will get out of hand later this week. “The Young and the Restless” fans won’t want to miss their next fight. Nikki and Sharon’s confrontations are always epic!

For now, we can watch Gloria (Judith Chapman) and Jack (Peter Bergman) face off. They’ve certainly been doing that a lot lately. Gloria was outraged when Jack refused to keep his end of the bargain. She wants a job and that’s that.

Jack will make some comments that Gloria doesn’t approve of on Tuesday. The preview clip shows Gloria saying, “You are making it sound like I am nothing to you but a sex object, which is exactly what got you into this mess.” Luckily, it appears they’ll manage to reach an agreement pretty soon.

Of course, Y&R spoilers hint that Gloria isn’t done wreaking havoc just yet. Jack’s efforts to pacify her will only lead to more trouble. We’ll give you updates as other details and rumors come in. Stay tuned and don’t forget to check Soap Opera Spy often for the latest “Young and the Restless” spoilers, rumors, updates and news.

Get Exclusive THE YOUNG & THE RESTLESS News & Updates!