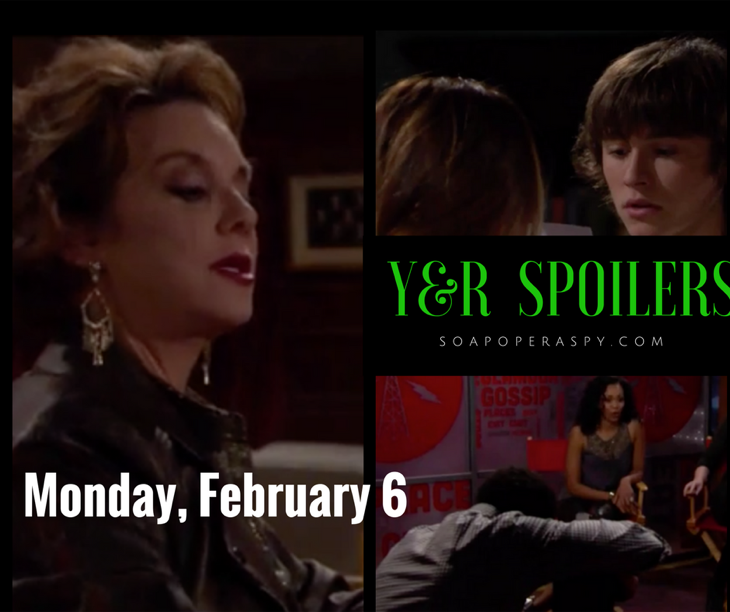 “The Young and the Restless” spoilers for Monday, February 6, tease that Gloria (Judith Chapman) will urge Jack (Peter Bergman) to watch the latest episode of GC Buzz. At the athletic club, Gloria suggests that Jack will feel like a real idiot if he’s not in the loop. Jack looks perplexed and asks what Gloria has done.

Meanwhile, Devon (Bryton James) is suspicious of Hilary’s (Mishael Morgan) latest move. He doesn’t believe she’s really forgoing a settlement, but she argues that she wants nothing from him. Hilary sits next to Mariah (Camryn Grimes) and introduces the segment on “Clarissa.”

Back at the club, Jack is horrified as he watches the show. Just before Clarissa reveals who sexually harassed her, the feed cuts off. Hilary returns briefly and says they were having some technical difficulties. It looks like Jack dodged a bullet.

At the TV studio, Hilary rips into Mariah for leaving out important facts. She rants that she should’ve been told the story was about Jack. Mariah fires back that Hilary just wants to make Jack her next conquest. Devon walks over and sides with Mariah. He tells Hilary to find proof that the story is made up and she assures him she will.

After Hilary leaves, Mariah tells Devon she’s sorry about all of this. He lets her know that Hilary is off trying to prove the scoop is bogus. Devon mentions the divorce and admits that he doesn’t know if Hilary is sincere about not wanting money. He decides to order a cashier’s check for Hilary in the amount of $250 million.

Later, Jack concedes that maybe he owes Gloria something for her help. Gloria is intrigued and encourages Jack to work quickly. After Gloria heads out, Hilary finds Jack. He comes clean about his scheme with Gloria and what really happened that night. Hilary wants to turn the tables, but Jack doesn’t want any kind of scandal in the news. He insists on putting Jabot first by keeping Gloria pacified.

Other “Young and the Restless” spoilers say Phyllis (Gina Tognoni) won’t be happy about Billy’s (Jason Thompson) kiss. In the elevator, Phyllis shoves Billy away and accuses him of using her to get even with Victoria (Amelia Heinle). The elevator opens and Phyllis stomps off. Billy goes after her and they end up at Crimson Lights.

Phyllis listens to Billy’s apology, but still feels like he’s trying his luck with two women. A little later, Phyllis meets a guy she met online named Troy. Once they kick off their date, Troy won’t stop talking about his crazy ex. Billy watches nearby and can see that Phyllis is miserable. He walks over and pretends to be her boyfriend.

Billy explains that they had an ugly fight, but he wants another chance. Troy suggests that they should fix their relationship if they can. After he exits, Phyllis laughs and tells Billy she’s grateful he came to her rescue. She fills him in on Nick’s (Joshua Morrow) online dating idea and insists that she’s done with it.

Billy offers to set Phyllis up on a date with one of his friends, but she declines. Phyllis would rather not get involved with exes or their pals. Billy thinks there’s someone out there for Phyllis, but she isn’t sure she’s interested in finding what she once had.

Across town, Victoria scolds Reed (Tristan Lake Leabu) after reading her credit card statement. She confronts him about buying live cam shows of “The World’s Naughtiest Nymphs.” Reed makes a confession and Victoria grounds him for a month. Once their fight wraps up, Reed calls Billy and complains about Victoria.

Billy tells Reed that he’s staying out of it and hangs up. Reed explodes at his mom for turning Billy against him. He accuses her of being cold like Victor (Eric Braeden). Y&R rumors hint that the drama will continue for Victoria and Reed. Stay tuned for updates on their complicated relationship.

WATCH: ‘The Young and The Restless’ Preview Video Monday, February 6