‘The Young and the Restless’ Spoilers Tuesday, February 14: Jill Gets Shocking News – Lily Walks Out On Cane – Phyllis and Ravi Cause a Stir 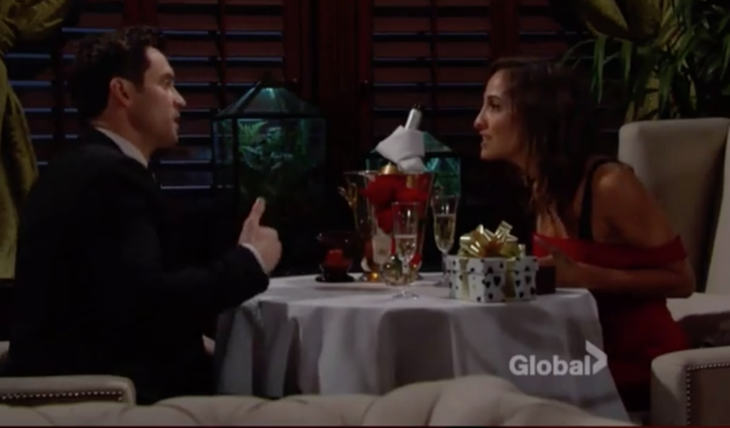 “The Young and the Restless” spoilers for Tuesday, February 14, tease that Cane (Daniel Goddard) will continue to fume. At Brash and Sassy, Billy (Jason Thompson) insists that Cane needs to show his support for Victoria (Amelia Heinle) or get lost. Cane eventually exits with Lily (Christel Khalil).

Billy assures Victoria that he’s there for her. They discuss last Valentine’s Day and Billy’s proposal. He asks Victoria to join him for dinner, but she isn’t interested. They debate a little more and Billy gets fed up with the situation. After Victoria turns down his offer to drive her home, Billy suggests she’s just as cold as Reed (Tristan Lake Leabu) thinks she is.

Meanwhile, Jill (Jess Walton) makes a pitch to Jack (Peter Bergman). She reminds him that he doesn’t have controlling interest in Fenmore’s. Jack doesn’t want to sell his share to Jill, but she persists. Ashley (Eileen Davidson) walks in Jack’s office and contends that he needs to at least consider it.

Jack finally writes down a number and tells Jill to take it or leave it. She glances at the paper and lashes out at Jack for trying to take all her money. Jill shouts that Jack doesn’t even really want his share of Fenmore’s.

After Jill stomps off, Ashley hints that Fenmore’s will be a thorn in Jabot’s side. Jack feels confident Jill will be back. Later, Jill decides to dig into her personal accounts and risk her retirement money.

Back with Jack and Ashley, talk turns to Valentine’s Day. Ashley mentions that Phyllis (Gina Tognoni) is out with Ravi (Abhi Sinha). Jack doesn’t think it’s appropriate since they work together and there’s a considerable age difference. Ashley feels like those obstacles aren’t a huge problem. However, she certainly doesn’t believe Phyllis is a good match for Ravi.

At The Underground, Chelsea (Melissa Claire Egan) meets up with Nick (Joshua Morrow). Nearby, Ravi and Phyllis chat about online dating. When Ravi notices Nick is staring at them, Phyllis mentions that they’re exes. Nick walks over and Phyllis introduces Ravi. She wonders what Nick and Chelsea are doing this evening, but he doesn’t say much.

When a bartender calls in sick, Chelsea fills in. She whips up some drinks, including one for Ravi. Phyllis encourages Ravi to dance with her and he agrees. Billy comes in and spots them, but Phyllis tries to scurry off quickly. Chelsea and Nick also decide to dance together.

At the athletic club, Lily and Cane sit down for a romantic meal. Unfortunately, Cane kills the mood by ranting about his Brash and Sassy issues. When Lily objects, Cane suggests she just doesn’t understand. Lily tells Cane he should leave. She can find her way home later. Y&R fans will be anxious to see what’s next for this struggling couple.

Other “Young and the Restless” spoilers state that trouble is brewing for Colin (Tristan Rogers). At the Chancellor mansion, Colin tries to give Jill a night of passion. She hints that her meeting with Jack was a disaster, but she wants to enjoy herself tonight. Esther (Kate Linder) irritates Colin by hanging around, but Jill defends her.

When Colin goes upstairs, Jill takes a call. She’s stunned by the news she hears. Her personal accounts have been drained and there’s not enough to cover her planned purchase. Jill looks angry as she realizes Colin is to blame.

WATCH: ‘The Young and The Restless’ Preview Video Tuesday, February 14