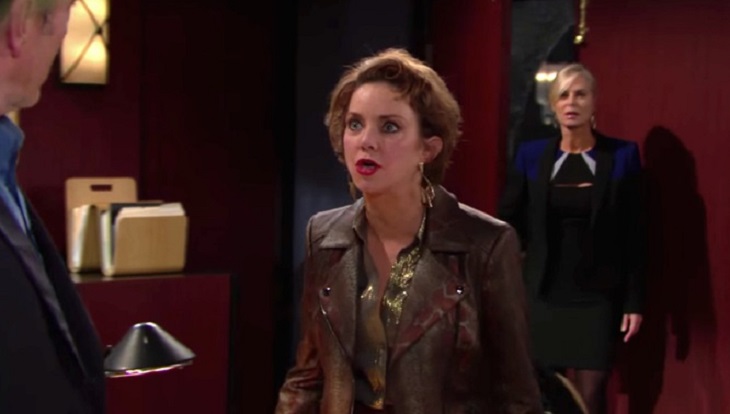 Ashley (Eileen Davidson) knows something is very wrong on ‘The Young and the Restless’. There’s no way that Jack (Peter Bergman) would willingly hire Gloria (Judith Chapman) as his executive assistant unless some form of blackmail was in play. Whether Ashley can force Jack to come clean in time to avoid disaster is yet to be determined. As for the woman in question, ‘Glo’ intends to remain a thorn in her former family’s side until she’s stopped.

Gloria and John (Jerry Douglas) loved each other. The Abbott family can deny that fact if it wants to, but those two characters and the audience know it’s true. Regardless of that reality, Jack applied the hatred of his two-time mother-in-law in a viscous and unnecessary manner. He effectively blocked Gloria from receiving any portion of John’s inheritance, which is not what his father wanted.

She tried her best to fight back at the time, but eventually Gloria left town. Maintaining vengeful thoughts through present day, the former Mrs. Abbott’s intentions were clearly to insinuate herself back into the lives of her former step-children when she recently returned to Genoa City. Gloria accomplished that goal as of February.

Personal relationship repair isn’t on Gloria’s checklist. Instead, she either used an unexpectedly awkward escapade to gain leverage over Jack, or actually set the situation up. Y&R’s audience hasn’t yet confirmed when Gloria’s plan was put into motion, but it knows that she’s succeeding even if all of it is purely a riff.

Jack was basically forced to give Gloria a job at Jabot. Now that the worm has entered the apple it won’t be long before the entire cart falls. Ashley might be able to save her father’s company from potential ruin and help her brother avoid another public disgrace. But ‘Smilin’ Jack’ will need to come clean with ‘Ash’ in order for that to happen.

Considering all circumstances in play, the likelihood of Gloria being fully thwarted this time around appears to be challenging. In the meantime, mind games and mayhem are sure to persist indefinitely.