‘The Young and the Restless’ Spoilers: Unexpected Dylan Sendoff – Few Predicted This Climax 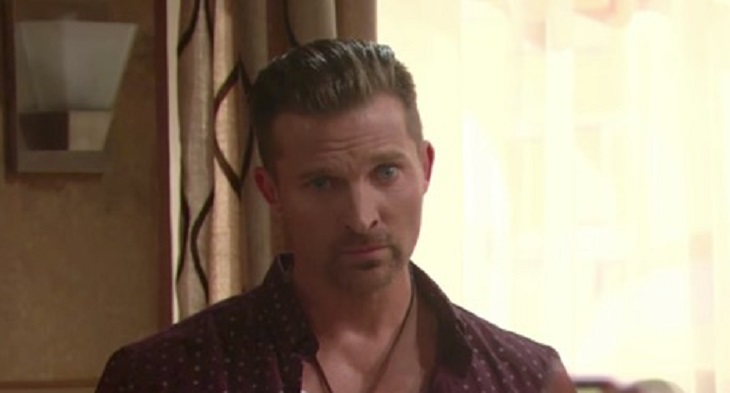 Sharon (Sharon Case), Paul (Doug Davidson) and Christine (Lauralee Bell) thought Dylan (Steve Burton) was dead on ‘The Young and the Restless’. This scribe believed he was missing, or would be presumed dead and that the actor had played his farewell scene. But head writer and co-executive producer Sally Sussman, along with her writing team created an unexpected sendoff that few viewers likely saw coming.

It would be easy to claim now that Dylan’s appearance at the cottage door was expected. But it wasn’t and few honest fans would make that claim.

And to skip to some proposed hypothetical, regarding how Burton’s character’s last scenes should have played out alternatively would indicate a personality type that refuses to offer kudos when it’s due.

Various ominous clues preceded Dylan’s trip to Miami. Among them included his loved one’s passioned pleas that he cancel his undercover drug sting due to his mental state.

Sharon’s dropped photo of her hubby, with resulting bad-luck-glass-break clearly was intended as a plotted dark cloud. But no, Derek (Dylan’s alias) wasn’t offed by Alex (Jess Webb) or the goon that was with her. He outwitted them an went home to Genoa City.

Paul flew to Florida to personally handle the investigation into Dylan’s disappearance. He got no satisfaction, or useful information from Luther Fisk (Scott Speiser). However, the chief was able to identify a bracelet as belonging to officer McAvoy during a phone conversation with Chris. At that point all characters except Sharon thought Dylan was a goner, or at the very least in a life-threatening situation.

An episode-ending teaser showed Dylan arriving at the cottage. But savvy Y&R fans likely were wondering if Sharon was dreaming? No, that return really happened. Dylan arrived safely home, but wouldn’t be staying for long.

The idea of Paul losing two sons tragically didn’t seem justified. However, Dylan’s expected death would have met believability standards based upon his profession. Having escaped Miami, the idea of Dylan now wanting to protect his loved ones by keeping a cover indefinitely makes sense.

‘General Hospital’ News: 2017 Daytime Emmy Awards – Why Did These 5 GH Characters Get Overlooked?