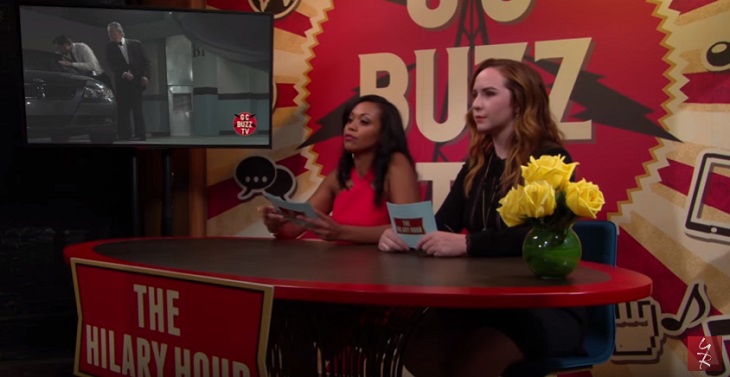 “The Young and the Restless” spoilers for Monday, July 24, tease that Mariah (Camryn Grimes) will brace for big trouble. At the TV studio, Hilary (Mishael Morgan) is adamant about airing the scandalous footage. Mariah warns that Hilary will be kicked to the curb over this.

Meanwhile, Nick (Joshua Morrow) and Sharon (Sharon Case) have a chat at Crimson Lights. They talk about all the Newman drama and how it’s great that Faith (Alyvia Alyn Lind) is oblivious to it at camp. Scott (Daniel Hall) clashes with Abby (Melissa Ordway) a bit before making his way over to Sharon. After Nick exits, Scott and Sharon agree to meet up later.

At Jabot, Gloria (Judith Chapman) is irked by the news that Jack (Peter Bergman) escorted Nikki (Melody Thomas Scott) to the cabin. Jack admits Dina (Marla Adams) wasn’t happy that he bailed on her. As she leaves, Gloria mentions that she’s going to see Graham (Max Shippee).

Elsewhere, Ashley (Eileen Davidson) arranges a spa day with Dina and Abby. She runs into Ravi (Abhi Sinha), who worries that maybe he crossed the line by sharing his Dina concerns. Ashley insists that she appreciated Ravi’s updates. She intends to watch Dina’s behavior closely.

At the spa, Dina talks to Abby and Dina about appreciating younger men. She also enjoys their time together. Dina feels like she doesn’t have much to do now that she’s not working. Abby and Ashley agree to plan more days like this one.

At the police station, Sharon takes calls at the crisis hotline. When a woman named Crystal (Morgan Obendeder) phones, she states that someone is forcing her to have sex for money. Sharon tries to get details, but the call is cut off. 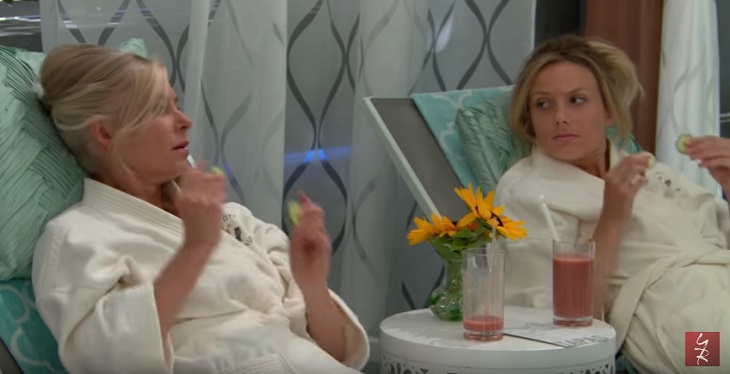 Once Scott hears what’s up, he recalls that Christine (Laralee Bell) was trying to bring down a sex ring. He thinks Crystal might be stuck in it. Later, Sharon reflects on being pregnant as a teen. She confesses that she was raped and Scott praises her for being so brave.

At the ranch, Victoria (Amelia Heinle) hears about Nikki’s trip with Jack. She sighs over the fractured family and wishes things could would go back to normal. Nikki insists that Victor is bailing this time around. Nick arrives and rants about his father. They eventually watch Hilary’s show together, but it’s not a relaxing experience. Nick, Nikki and Victoria are all taken aback when the brawl footage airs.

Mariah tries her best to make the punch seem like no big deal, but Hilary milks it for all it’s worth. She even goes for an instant replay. Victor sends a text with a thumbs-up sign once the damage is done. At the athletic club, Neil (Kristoff St. John) informs Cane (Daniel Goddard) that they won’t be able to hire him. However, he hopes everything will work out for Cane and his family.

Nearby, Graham and Gloria flirt their way through lunch. They decide to meet up again later. At Jabot, Cane thanks Jack for his interest. When Jack drops a couple hints, Cane understands that he needs to provide info on Brash and Sassy. Jack suggests that this could be the beginning of an offer. They shake on it.

It sounds like “The Young and the Restless” has some sneakiness in store. We’ll keep you posted as other Y&R details and rumors emerge. Stay tuned to see what’s ahead in Genoa City.

This Is Us Spoilers: Kate Pursues Her Dreams! What To Expect In Season 2 Premiere