The Young and the Restless Spoilers Thursday September 21: Victor Stuns Kevin – Scott Sees Someone Shocking – Juliet Cozies Up to Cane 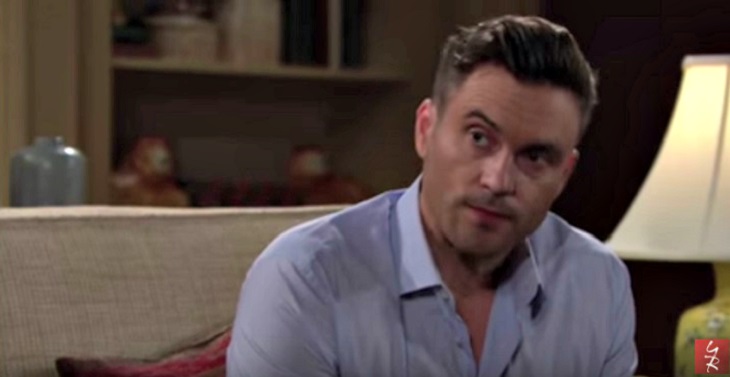 “The Young and the Restless” spoilers for Thursday, September 21, tease that Juliet (Laur Allen) will surprise Cane (Daniel Goddard) with some takeout. At the Chancellor mansion, Cane asks Juliet if she wants to stay. She takes him up on the offer and listens to all his family drama. Juliet suggests that the twins will come around eventually.

When Juliet brings up their baby, Cane seems glum. Juliet suspects that Cane won’t have the same kind of love for their child. Cane confesses that it’s tricky and he feels like he’s being forced to make a choice. Juliet promises to be a doting mom and lightens the mood by suggesting an odd name. Cane knows this has been a difficult ordeal for Juliet as well. She moves close and leans in for a kiss.

Meanwhile, Tessa (Cait Fairbanks) catches Mariah (Camryn Grimes) off guard at Sharon’s (Sharon Case) house. She hints that someone new is in her life, but Mariah relaxes when she realizes it’s the music promoter. Noah (Robert Adamson) picks Tessa up for Nick’s (Joshua Morrow) family dinner. Devon (Bryton James) also arrives and sticks around to canoodle with Mariah.

At Crimson Lights, Sharon and Scott (Daniel Hall) are bummed about the lack of info on Crystal (Morgan Obenreder). Their car pursuit didn’t offer any new leads. Scott thinks maybe he should talk to some of the women for sex trafficking articles. He might be able to get Crystal info out of them. Sharon frets, but Scott is willing to do whatever it takes to help her crack the case.

Tessa’s name comes up and they plan to support her big night at The Underground. Sharon suggests that Noah and Tessa’s relationship isn’t all that serious yet. However, she feels like it’s probably time for Scott and Faith (Alyvia Alyn Lind) to have a proper introduction.

At Chelsea’s (Melissa Claire Egan) penthouse, she still has concerns about the Victor (Eric Braeden) situation. After Noah and Tessa arrive, they spend some time with Faith. She wonders if Tessa has any brothers or sisters. Noah quickly takes control of the chat to put Tessa’s mind at ease.

Faith mentions how Victor threw Nick out of the tack house, but Noah suggests that people make mistakes. It’s still hard for Faith to deal with a less than perfect grandpa. At Lily’s (Christel Khalil) place, she wants Mattie (Lexie Stevenson) to hang out at the athletic club with her. Mattie is still upset about all the Reed (Tristan Lake Leabu) drama, but seems curious about the marriage counseling session.

Related: The Young and the Restless Spoilers: Cane Doesn’t Lose Hope – Will He Win Lily Back?

Lily tries to squelch Mattie’s optimism just as Jordan (Darnell Kirkwood) arrives. Mattie gets snappy and notes that his timing is perfect. She tells Lily to go to the club with Jordan since that’s what she really wants. After Mattie stomps off, Lily opens up to Jordan about how tough everything has been. She doesn’t think Cane understands how much Juliet’s baby will change things.

At The Underground, the music promoter struts over to Devon and Noah. Irv West (Wayne Knight) introduces his “girlfriend,” who’s actually Natalia (Tina Ivlev) from the sex ring. Nearby, Scott spots her and realizes she has a familiar face.

At the ranch, Victor wants Kevin (Greg Rikaart) to take back the money Nick won in the lawsuit. He’d like $500 million transferred out of Nick’s account so he can see what true independence feels like. Kevin points out that this is illegal, but goes along with the plan. He gives Victor several opportunities to back out, but Victor remains committed to the scheme.

It sounds like Nick is in for a huge shock. We’ll give you updates as other “Young and the Restless” news and rumors emerge. Stick with Y&R to see what’s next in Genoa City.