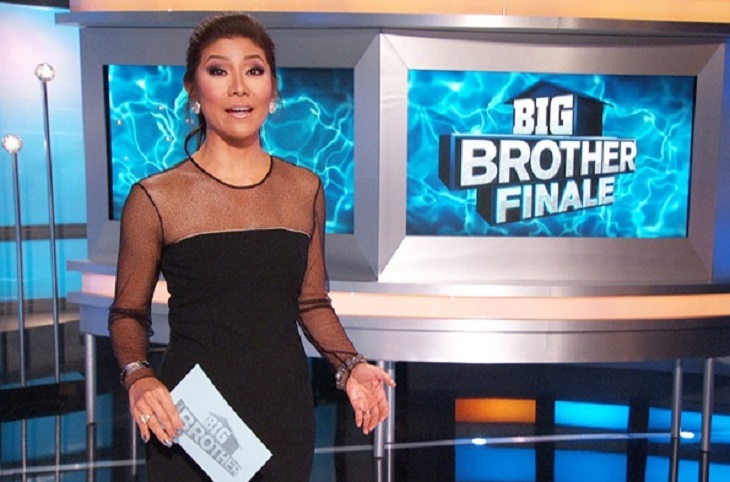 Big Brother 19 finale is finally here, and Julie Chen talks about what she thinks will happen on tonight’s episode and all the juicy tidbits she knows so far about Celebrity Big Brother US.  It should be an action-packed episode as we finally learn who will take home the grand prize of $500K.  The Chenbot jokes that she isn’t sure if she is really rooting for Josh Martinez to win, but she started to like him after she began to see his redeeming qualities.

Who Was Julie’s Favorite Exit Interview?

Without a doubt, Chen said that Cody Nickson was her favorite exit interview. She liked how he saw a lighter version of himself than we saw inside the house and felt that it helped connect him to his followers.

“It showed that he had a lighter side to him than this angry hot head with a chip on his shoulder in the house,” Julie explained to THR. “It was pleasant to see that he actually is a human being! He was more engaging and smarter than some viewers have given him credit for. In this game, you always root for the underdog.”

Julie said that Kevin Schlehuber was very popular among the fans. She thinks he has a great shot to win the vote. However, he will be going against Jason Dent, whose wife is pregnant and Jessica Graf and Cody, two underdogs that the fans seem to like.  “It’ll be a close call,” Chenbot said.

Paul Has No Idea America Hates Him

Chen said that Paul has NO idea that America generally dislikes him.  In his mind, he’s just playing the game and thinks America will appreciate him. Little does he know, many of the BB19 fans truly despise him.

The Big Brother host isn’t sure who will win tonight but suggests she was rooting for Josh.  She doesn’t think it will be a landslide and predicts a very close vote.  She did say she thinks Christmas has virtually zero chance of winning the game.

Julie won’t spill any celebrity names but teases more than one person from *NSYNC may be wanting to get on the show.  Soap Opera Spy reported that Lance Bass joined the cast. She added that CBB would be action packed because it will be condensed. So everything you see on the summer season, but fast forwarded.

Who do you think will win Big Brother 19?  What celebrity would you like to see join CBB US?  Stick with Soap Opera Spy for more Big Brother spoilers, news, and casting updates!

WATCH: The Young And The Restless Preview Video Thursday September 21

The Young and the Restless Spoilers Thursday September 21: Victor Stuns Kevin – Scott Sees Someone Shocking – Juliet Cozies Up to Cane