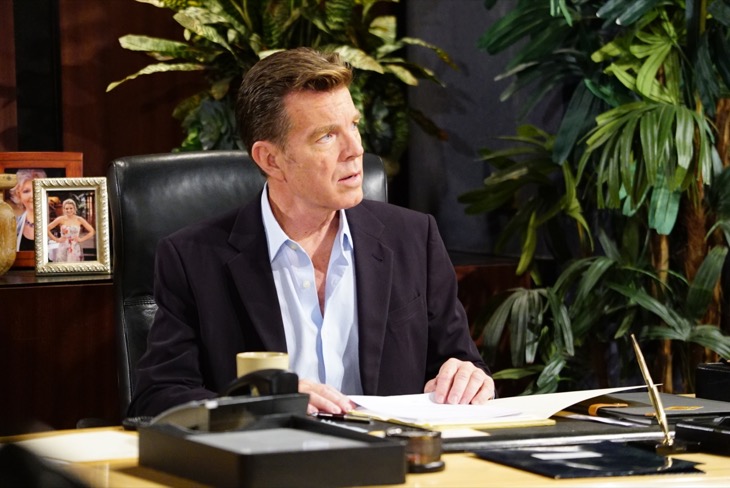 “The Young and the Restless” spoilers for Thursday, August 17, tease that Cane (Daniel Goddard) will have a nice chat with Juliet (Laur Allen). The tension seems to have lifted slightly. At the athletic club, Cane mentions a new job opportunity. Juliet points out that anyone would be wise to bring him on board. Cane chuckles about Juliet’s optimistic view and she offers to be there for him anytime.

Meanwhile, Lily (Christel Khalil) tells Neil (Kristoff St. John) that she’s hoping to score more auditions. She notes how much strife the whole family’s dealing with. Lily and Cane have moved past issues before, but she’s not sure they can do it this time around.

At the cabin, Ravi (Abhi Sinha) and Ashley (Eileen Davidson) establish that they have no regrets about their sex session. Ashley cozies up to Ravi and he reminds her that there’s no pressure. He’s OK if this turns out to be a fleeting moment of something special. Ashley suggests that they can’t predict the future, but she’s glad they spent this time together.

You Might Also Like —> The Young And The Restless Spoilers: Prostitution Ring Exposed – Scott Discovers Abby Is Involved?

Elsewhere, Graham (Max Shippee) fills Dina (Marla Adams) in on the changes he made to her budget report. At Brash and Sassy, Victoria (Amelia Heinle) lashes out at Billy (Jason Thompson) for his efforts to team up with Victor (Eric Braeden). Billy concedes that it wasn’t the best plan, but wonders why Victoria hasn’t signed Ben Hochman’s (Ben Hermes) contract.

Victoria says she wanted to mull it over, but Billy counters that she usually doesn’t question her instincts like this. In Jack’s (Peter Bergman) office, Ben provides updates on the dirt Cane is willing to give. Jack isn’t sure it’s a good idea. He shifts gears and pushes Ben to get Victoria’s signature ASAP.

Once Ben leaves, Jack takes a call before heading over to Brash and Sassy. He stuns Billy and Victoria by presenting a new lease agreement. It’s been a year, so Jack can raise the rent. Billy and Victoria rip into Jack, but he won’t budge. Later, Victoria decides signing Ben’s contract is necessary.

In Ben’s suite, he pushes Cane to tell him what he knows. Cane contends that he can’t spill details until there’s a deal on the table. Ben shakes Cane’s hand and they agree they’ll make a great team. Downstairs, Lily spars with Hilary (Mishael Morgan) before running into Cane. He thinks he’ll have positive employment news soon. Lily’s still upset about the difficulties Cane has caused.

Back upstairs, Victoria corners Ben in his suite. She saw Cane exiting and assumes they’re working together. Victoria pulls out the contract and tears it up. She hears the usual buzzing sound as she prepares to stomp off. Once she’s in the hall, Ben tries to stop her. Hilary lurks nearby and decides to record their confrontation.

You Might Also Like —> The Young And The Restless Poll: Will Nick Forgive Chelsea When Truth Comes Out About Christian’s Paternity? VOTE!

Victoria snaps that she can’t believe she slept with Ben, but he fires back that she couldn’t get enough of him at the time. Neil spots Victoria leaving in a huff and looks perplexed. At Jabot, Jack tells Ashley that he raised Brash and Sassy’s rent. He wants rid of them, but Ash thinks they’ll fight harder now. Talk turns to Graham and they wonder if he’s withholding info about Dina (Marla Adams).

Speaking of Dina, she runs into Billy (Jason Thompson) and they enjoy a cordial conversation. He takes her on a tour of Brash and Sassy. Billy suggests that John (Jerry Douglas) would be fine with Dina coming on board at Jabot. They discuss how they’d both like to have a better relationship with Ashley. Billy points out that he wouldn’t mind fixing his relationship with Jack as well.

“The Young and the Restless” spoilers say Billy will try to charm his way into Jabot secrets soon. Will Dina take the bait? We’ll keep you posted as other Y&R news and rumors emerge. Stay tuned to see what’s in store on the CBS soap.

Christian Soap Opera To Debut Big Soap Stars Sign On – Will You Watch?