The Young and the Restless Poll: Will Nick Forgive Chelsea When Truth Comes Out About Christian’s Paternity? VOTE! 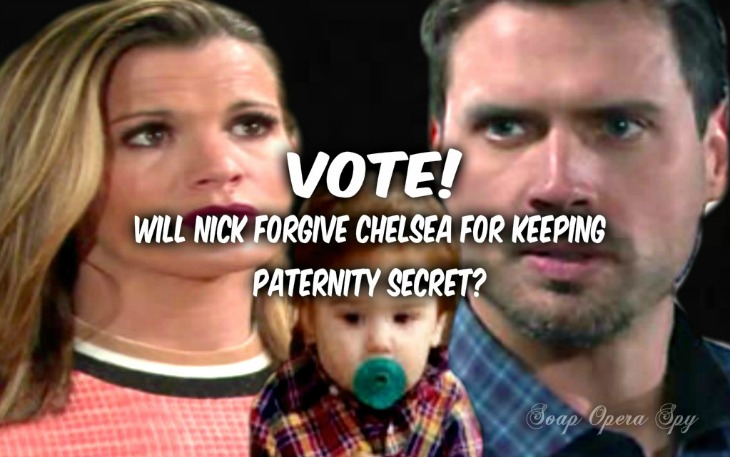 The Young and the Restless’ Chelsea Newman (Melissa Egan) has been hiding a secret for quite some time now, but the truth always has a way of coming out! Chelsea knows the true paternity of baby Christian and has not bothered to mention it to her boyfriend Nick Newman (Joshua Morrow). So our question to you is, do you think Nick will forgive Chelsea once the truth comes out?

As we all know Chelsea Newman is not the only one that knows her late husband Adam Newman actually is the father of Christian, but his dad Victor Newman (Eric Braeden) knows as well. With Victor and Nick on the outs and taking shots at one another, we can never put it past Victor to throw it in his son’s face. Chelsea and Nick have been getting a lot closer lately and he may look at it as a way to make Nick lose it all. It’s so sad being that they are father and son and their relationship has went this way, but it’s definitely not the first time.

With Nick Newman moving in with Chelsea they are bound to grow closer than what they already are. With that being said Chelsea Newman may end up being eat up with guilt and tell Nick the truth herself. Do you Y&R viewers think so? It’s definitely been a long time coming and with Sally Sussman gone it’s very likely that this storyline will be revisted. Since Sally said she didn’t want to go there. So are Y&R fans ready for the truth to be revealed?

Y&R’s Nick Newman has always been a very judgmental guy. Chelsea has been put in hard spots knowing this truth, but if it comes out do you think he will judge her like everyone else and be done with her? Please take a vote in our poll and let us know how you feel. Do you think Nick will forgive Chelsea once the truth comes out? Make sure to stay tuned to CBS’s “The Young and the Restless” to see if the truth is finally revealed.

The Young and the Restless Spoilers: Cane Makes Another Dangerous Deal – Ben Loyal to Money