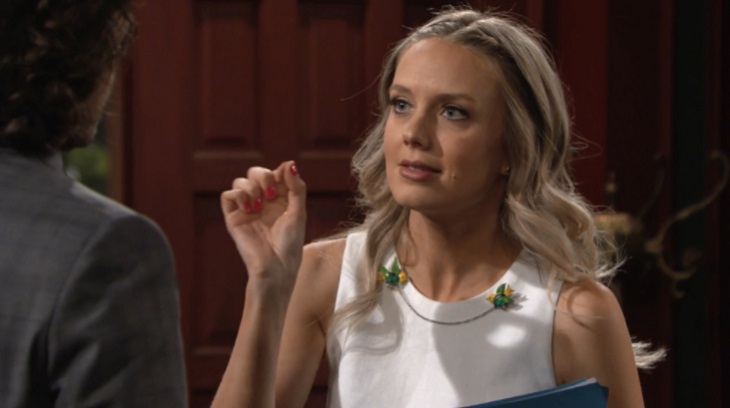 “Y&R” spoilers have indicated that it is not Christine Williams (Lauralee Bell) and the GCPD that exposes the sex ring, in fact, it is none other than Scott Grainger (Daniel Hall). Scott, as an investigative reporter, has the skills to investigate and put the pieces together. That is why Christine and other agencies have used Scott’s skill to uncover the truth in the past. Recently on Y&R Christine had met with Scott and Sharon McAvoy at the coffee house.

Christine shared that this was not big enough to pursue, that Crystal (Morgan Obenreder) is just mixed up in a small ring of johns and hookers. Sharon’s not happy to just write Crystal off and so Scott decides to help Sharon look for Crystal. Scott finds out this small sex ring is running under the identity of massage. Scott found an ad, called to make arrangements to meet up with a girl to gather information on Crystal, and it paid off. Scott was able to gather some information on the operation of this sex ring Crystal is caught up in.

“Y&R” spoilers tell us that Scott’s investigating is going to lead him down a path that will not only reveal the sex ring, but also the dating app and Abby’s (Melissa Ordway) unknowing part in it. The sex ring tied to the app and a Newman, that is only going to bring bad press for Newman Enterprises, and only means Victor (Eric Braeden) is going to have a problem. Victor does not want to look bad ever! He will want to handle this quietly as not to bring attention to the Newman name or involvement.

Scott will want to handle this legally in order to bring the whole thing down.  However, there are many variables to this that Scott will want to protect, such as Sharon, Abby, Tessa (Cait Fairbanks), and Crystal. It will be interesting to see just how this is dealt with. Abby will come under a lot of fire.This is a big screw up and no doubt Victor will upset with Abby over it.

“Y&R” spoilers hints that there will be an Abby/Scott relationship. Not the best of news for Sharon, though this will not happen for a while. Do you think this event will bring the two together? This is going to devastate and sicken Abby to know she had a part in funding Zach’s (Ryan Ashton) app and the sex ring. Surely someone will be there to help comfort her. Could that someone be Scott?

Leave us a comment below and let us know your thoughts. Catch “Y&R” weekdays on CBS. Then check back often with Soap Opera Spy to stay up to date on all “Y&R” news, updates, spoilers and so much more!