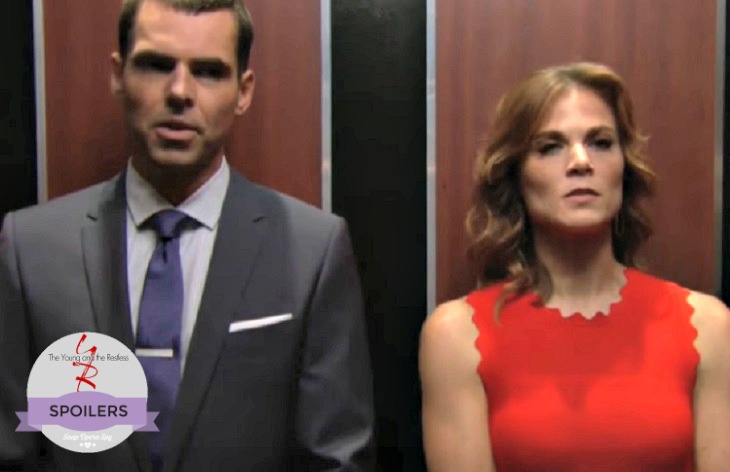 Billy (Jason Thompson) kissing Phyllis (Gina Tognoni) was surely another one-off on ‘The Young and the Restless’. Mr. Abbott had just been dismissed by Vickie (Amelia Heinle), as the former Mrs. Abbott again reacted viscerally to his presence. Yes, ‘Philly’ detractors would state the last two lines as they hope Phyllis and Billy don’t become a super couple.

Both characters are currently single. Actually, they were roughly cut loose by their spouses. Because each person is attractive, they have options.

The fact these dumped spouses were initially attracted to the other and have remained so can’t be denied. And that’s why their latest impulsive gesture matters.

There’s no question that Jack is done with the former ‘Red’. He divorced her quickly, then later followed up with a goodbye kiss and best wishes in the Genoa City Athletic Club lobby awhile ago.

Vickie may, or may not be done with Billy. In her heart she loves the guy. But her gut tells her to keep him at a distance. Longtime viewers can’t really blame her, as Billy does act like a boy quite often. Thus the meaning behind Victor’s (Eric Braeden) tag line ‘Billy-boy’ has deepened through the years.

Within the last month, the possibility of ‘Philly’ seemed lost. They spoke on a few occasions and shot some passing glances. But this potential storyline seemed to have been side-stepped by reigning head writer Sally Sussman and her team.

As many viewers know, real life relationships don’t always form smoothly. Some stop-and-start instances have been experienced in the world beyond what’s seen in Wisconsin. So, is it possible that Phyllis and Billy are moving toward an eventual union?

This scribe came to believe that Sussman and company weren’t interested in pursuing a plot path that former head writer Chuck Pratt, Jr. set. The pairing seemed to be a bad fit for historical reasons and because of how wide segments within the audience rejected this intended option. However, the future may play out differently, or be held for potential revisiting.

Initial chemistry can’t be denied. Tognoni and Thompson are solid actors. Plus, their efforts and good writing might surprise all involved, most especially the viewers.

‘The Young and the Restless’ Spoilers: Devon Gets What He Asked For – Hilary Serious About Divorce