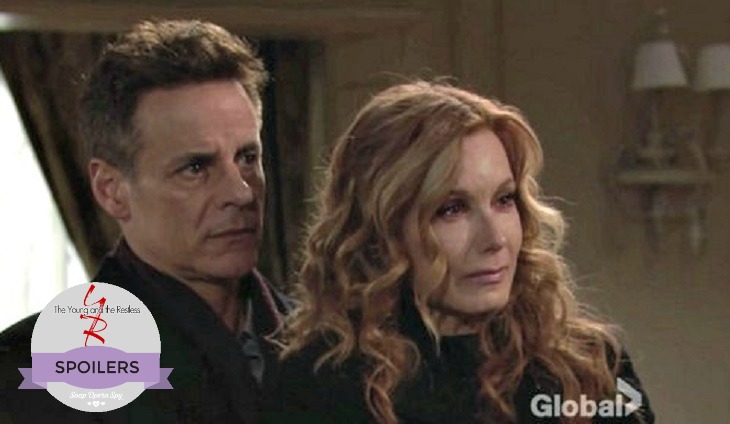 Scott (Daniel Hall) is alive because Victor (Eric Braeden) intervened on ‘The Young and the Restless’. At least that’s what Lauren (Tracey Bregman) believes. Hypothetical arguments are all that can be offered when viewers consider Scott’s alternate fate, sans the ‘Moustache’. Combine this reality with Lauren’s open offer to return Victor’s favor and Michael (Christian Le Blanc) is right to be leery.

Jill (Jess Walton) couldn’t help Lauren because her fluid cash reserve was gone at the time Scott was kidnapped. Colin (Tristan Rogers) was the culprit, of course. So Lauren went to the Newman Ranch as a last resort.

Braeden’s character is currently undergoing a major transformation, or evolution. He’s truly trying to live a better life, due in part to the aftereffects of Adam’s (Justin Hartley) death. Victor’s willingness to help Lauren was genuine. His motivation was further clarified when he added that he valued the work heroic journalists are doing around the world. That likely hidden curriculum point was inserted into the script as Y&R’s response to perceived slights coming from the political world.

Of course, perception of reality is purely shaped by one’s experience. Michael had plenty of experiences with Victor when he was living as the ‘Dark Knight’. Mr. Baldwin’s instincts tell him that Lauren will be called upon to return Victor’s apparent kindness in some costly form at some future point. The old Victor might want a stake in Fenmore’s. Time will tell what this new man wants. Get it? Yes, that was a bad joke.

Related: The Young and Restless Life of William J. Bell: Creator of Y&R and B&B

‘Likey’, ‘Niktor’ and other couples, including the intriguing prospect of Ashley (Eileen Davidson) and Ravi (Abhi Sinha), went to the opera and then the Top of the Tower. The promise Lauren made during that night to pay Victor back basically serves as a verbal blank check.

Victor’s has also offered to tap his contacts regarding the whereabouts of Scott’s missing friend. The semi-retired head of Newman Enterprises also said that he might have a job for the currently unemployed writer. Yes, the Fenmore-Baldwin family is in debt to Victor. Whether, or how he collects should prove to be good soap.