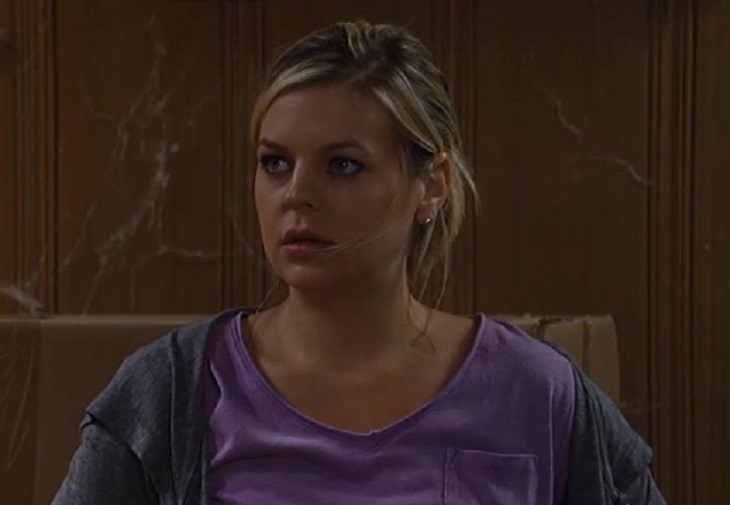 GH spoilers tease that Kirsten Storms (Maxie Jones) is taking another leave of absence from General Hospital for personal reasons. This isn’t the first time she has taken a leave during her twelve years as Maxie.  Will TPTB at the ABC soap opera decide to recast the role of Maxie again?

In the fall of 2011 Jen Lilley took over the role due to Storms taking an extended medical leave for endometriosis. Lilley remained in the role just short of one year. Dedicated General Hospital fans had different opinions on Lilly as Maxie but were glad the character was temporary recast instead of killed off.

Related: Helena Cassadine’s Curse Is Back – Carly Prepares To Kill Liv – Lulu Realizes She May Lose To Valentin

Storms returned as Maxie for the next four years but would need another leave of absence in May 2016 for skin issues. She stated the “breakouts were due to stress but shouldn’t take too long to get under control”. Storm and ex husband Brandon Barash (Johnny) had decided to end their marriage and begin co-parenting with their daughter Harper Rose. It was becoming difficult for GH to cover up the skin issues. Storms

It was becoming difficult for GH to cover up the skin issues. Storms stated in the August 15th Issue of Soap Opera Digest “I don’t think it was something that was in anyone’ control. My skin had just gotten to a point where it was telling me and my body that I needed to take a break”.

Molly Burnett was the next actor to step in to portray Maxie. Daytime fans would recognize Burnett as ex-Melanie on Days Of Our Lives. Burnett’s stay would be brief as Storms returned as Maxie sooner than expected. Burnett was grateful for the chance to step in for Storms during the short leave of absence.

Storms returned to the role and seemed to be doing fairly well. Her character Maxie married Nathan West (Ryan Paevey). Maxie was recently fired by Nina (Michelle Stafford) for calling Lulu (Emme Ryan) to Crimson office. Lulu didn’t know Charlotte was there until she arrived. Against Lulu’s better judgment she did stay and try to bond with her daughter. Nina’s meeting was canceled and she arrived back to her office sooner than Maxie expected. Nina felt betrayed and promptly fired Maxie. Maxie delayed in telling Lulu she lost her job, but eventually did confess the truth.

Related: One Life to Live: Thirty Years of Memories

Paevey revealed in January 2017 he would be filming a movie in Kentucky and playing a villain. Paevey would need a few weeks off from General Hospital to film the movie. One would think that movie will wrap up soon if it hasn’t already.   Its possible Storms decided to take her personal leave now to help with the recovering of her skin issues. Maxie and Nathan could possibly be on a honeymoon. The newlyweds will need to return to Port Charles soon.

It’s possible another temporary recast of Maxie Jones may be announced any day now.  Writers can delay a beloved character’s return for only a short time before fans start expressing their dismay. Who would you like to see cast as the temporary Maxie Jones?  Share your thoughts in the comments below and don’t forget to check Soap Opera Spy for more General Hospital spoilers and news.