The Young and the Restless POLL: Will Sheila Carter Return to Y&R After Appearing on B&B? 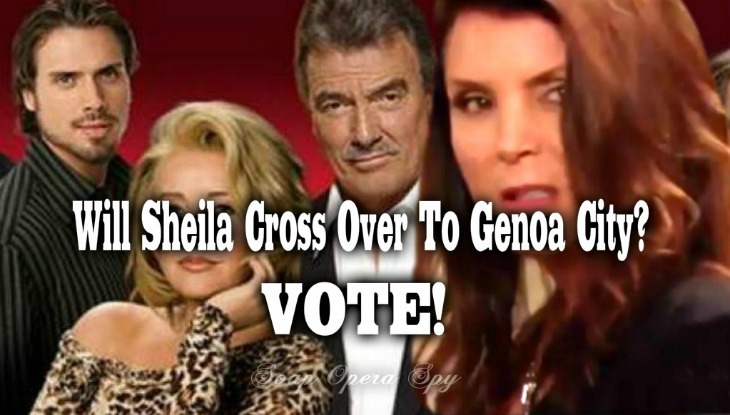 Sheila Carter (Kimberlin Brown) is arguably the greatest villain to have ever terrorized Genoa City on ‘The Young and the Restless’. She was murdered by Lauren (Tracey Bregman) 10 years ago, but somehow is alive. She just reappeared on ‘The Bold and the Beautiful’ in a stunning Friday cliffhanger episode. So, will Sheila also return to Y&R?

Readers will now see their digital screens fade, as a flashback sequence begins. So, Lauren and Sheila became fierce enemies decades ago. Yes, it was over a man. Dr. Scott Grainger (Peter Barton) was the target of both women, though Lauren had his son, Scottie (recently recast and SORAS’d via Daniel Hall).

Sheila and Lauren were pregnant at the same time, both claiming Scott’s child. Sheila’s baby was stillborn, but Genoa City didn’t know it. She bought a child and switched him with Lauren’s. That boy died.

Scottie was raised by Sheila for awhile. Her mom Molly (Marilyn Alex) learned the truth, went mute, but eventually relayed it to Lauren. Sheila held Molly and Lauren hostage in a farmhouse that then burned down. Two of the three women escaped. Sheila was thought to be dead until she reappeared on B&B.

In 2007, Sheila returned to Genoa City but was wearing a new face. She had extensive plastic surgery to make herself look like Phyllis. Yes, Michelle Stafford assumed this role while still playing ‘Red’. Lauren eventually learned who the double was and shot her.

In June 2017, Scott will apparently be covering a Forrester event for Victor (Eric Braeden). That soapy convenience will of course, allow Sheila to become aware of the object of her one-time obsession. Just imagine her reaction when that happens.

Whether Scott will recognize the woman who once claimed him as her son will prove intriguing. But will his presence on the left coast serve as a plot vehicle that lures Sheila back to Wisconsin? And beyond this resurrection details, how does she like her original self again?

Fans of ‘The Young and the Restless’ rightfully express their opinions on a regular basis. So, will Sheila return to Y&R? Vote in our poll below!

The Young and the Restless Spoilers Week of June 12 to 16: Lily Shocked At Neil’s Doubts – Cane Confronts Juliet and Blasts Victoria