The Young and the Restless POLL: Which Y&R Storyline Is Best? VOTE! 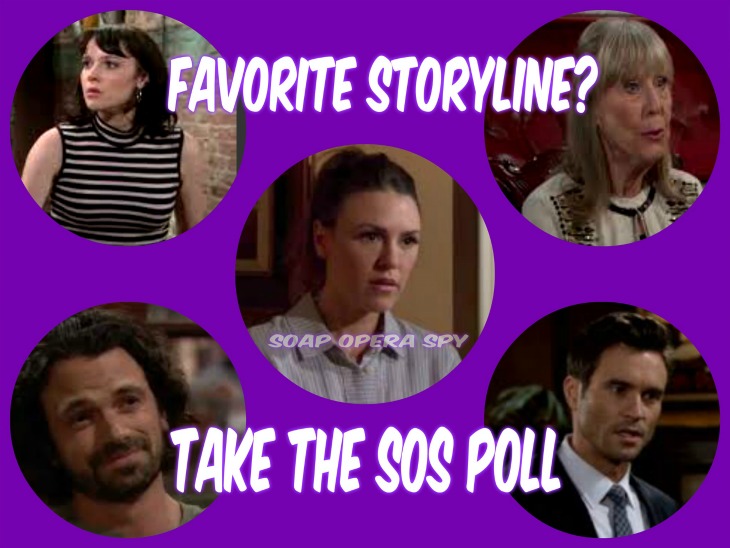 Multiple storylines run concurrently on ‘The Young and the Restless’, but which current tale is the best? Obviously this poll is geared toward supporters of Y&R. Those savvy souls value escapist entertainment and know that it’s smart to support what’s most compelling on their favorite show(s), as well as the soap opera genre in general.

Chloe (Elizabeth Hendrickson) faked her death and will soon set out on her last adventure. Kevin (Greg Rikaart) was summoned and has now been asked to retrieve Bella (Gia Poeme) so ‘Khloe’ can be fully reunited. Meanwhile, viewers are waiting for Victor (Eric Braeden) to stick his fingers into these Louisiana-based lives again. The write-out for tenured actors Hendrickson and Rikaart is sure to be solid. But how will both characters leave the story?

Cane (Daniel Goddard) had an ill-fated encounter with Juliet (Laur Allen) in Japan after a night of drinking. Awhile later he purposely set Billy (Jason Thompson) up during a photo shoot in Los Angeles, which helped to dash Brash and Sassy’s DARE commercial.

Vickie (Amelia Heinle) opted to fire Juliet, which has resulted in a messy lawsuit. How many lives will be dramatically impacted regardless of the legal proceedings and and how will Hilary (Mishael Morgan) use her gossip platform to make matters even worse?

Dina’s (Marla Adams) return to town has produced mixed results to-date. Her companion Graham (Max Shippee) remains a key to this mystery. Ashley (Eileen Davidson) has unexpectedly become protective of her previously estranged mother, whose behavior appears to represent an underlying health issue. Is Dina developing Alzheimer’s and does Graham’s connection have deeper implications than anticipated?

Scott (Daniel Hall) and Sharon (Sharon Case) are now a couple. Christine (Lauralee Bell) wants her nephew to take another job working undercover for the government. With that pending story put Sharon in danger, or result in Scott locating Adam (to be played by whoever)?

Tessa (Cait Fairbanks) doesn’t want to be anywhere near Zack (Ryan Ashton), who might be her brother or a past boyfriend. Noah (Robert Adamson) has been through the wringer with various girlfriends, so he’s understandably leery. Will Tessa’s backstory affect her burgeoning recording career with Devon’s (Bryton James) new streaming music company and put Noah in danger?

Related: The Young and the Restless Comings and Goings: Several Familiar Faces Returning To Y&R

Fans of ‘The Young and the Restless’ rightfully express their opinions on a regular basis. So, which current storyline do they think is the most compelling? Vote in our poll below!