The Young and the Restless POLL: Team Niktor or Team Nack – Should Nikki Stay With Victor or Go To Jack? 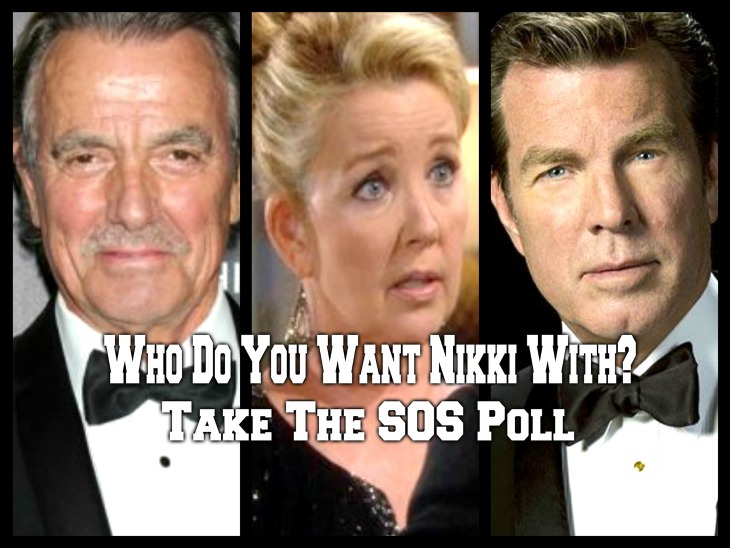 Should Nikki (Melody Thomas Scott) remain with her claimed soul mate Victor (Eric Braeden), or return to her longtime friend Jack (Peter Bergman) on ‘The Young and the Restless’? It’s obviously tempting to choose an unoffered option, whereby Nikki goes it alone from here on out. But that’s not the question that’s being asked in the headline.

Oh, it’s easy to slam the great Victor Newman. Why, he’s a man and therefore must be bad, right? Sexism is thus accurately tagged as existing within both halves of humanity. Yes, that exposed fact (not opinion) is a way to further confirm that all people are equal (and always have been). Attempting to dispute this truth deepens the point as well.

A hyper-charged lead-in to this feature has been offered in order to provoke spirited responses. As Y&R fans know, few people can honestly claim to have no take on the relationship that is known as ‘Niktor’.

This scribe doesn’t consider himself an expert on the link any two real world people claim to have. Implied omniscience appears to reveal a flaw within one’s character. However, it’s fair to offer some points of critique on this fictional couple.

Yes, Nikki has enabled Victor’s behavior through the years. But no one can argue that she’s the lesser individual, right? Consider the vast amount of crimes the ‘Moustache’ has committed and the manner in which he’s mauled people’s lives, including loved ones.

Based purely on the issue of aiding and abetting, Nikki should make a permanent break. Although, there are appearances that could be maintained if she continues to live with his creature. Access to power, expensive gifts and grand gestures will continue to flow if that’s her choice.

But what about that erstwhile Jack Abbott? Well, the contrast between the ‘Black Knight’ (one of Jack’s many delicious slams against Newman) and Jack isn’t as stark as might be imagined.

Lily’s World Crashing Down – Will She Stick With Her Man Or Leave Cane For Good?

Jack has committed his share of crimes, many of which attempted to rip off the ‘Moustache’. The greatest moral crime came when Jack left Victor for dead. Then, in modern times, Victor saved Jack’s life when The Underground collapsed. Wait, who is the goof?

Yet, Jack has long treated Nikki with a tenderness that Victor only displays to his wife when he’s in a good mood. Jack generally only engages in harsh dialogue with Nikki on one main topic, her emotional tie to Victor.

There are so many other points that can be made on this triangle, as seasoned viewers surely know. Thus, a simple answer to question being asked isn’t at hand.

Fans of ‘The Young and the Restless’ rightfully express their opinions on a regular basis. So, should Nikki stay with Victor or go with Jack? Vote in our poll below!

Soap Opera Spy is a leading source for everything linked to ‘The Young and the Restless’.  Check back with Soap Opera Spy for more Y&R spoilers and news right here.

EastEnders Spoilers: Mick Betrayed By Linda – What Secret Has She Been Hiding?