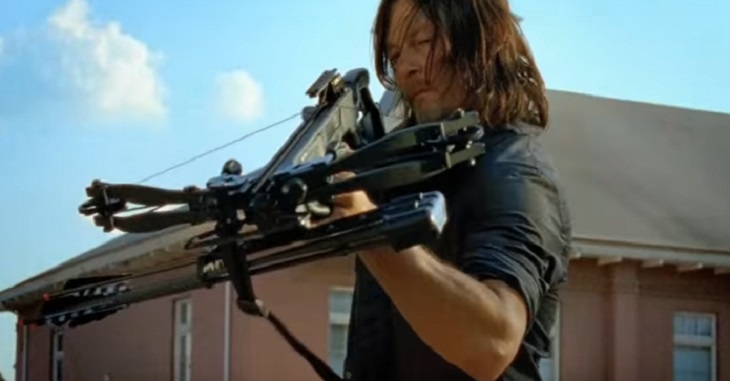 TWD spoilers tease that we are less than a week away for the return of “The Walking Dead.” You can now catch a peek at what’s to come in the Season 7B premiere.

AMC released a new and intense extended trailer for the season 7B return. In “The Walking Dead” trailer we see a lot of clips from the past and a few for what’s to come. The first half of season seven dealt with a lot of mourning and Rick Grimes’ (Andrew Lincoln) group trying to find their way again. Now, it’s time for them to pick up the pieces and move forward.

“The Walking Dead” Season 7B will be about rebuilding and preparing to fight. There is a storm coming and now the fight is on. Spoilers tease that Rick Grimes will be ready to step up to the plate and prepare his crew to take on Negan (Jeffrey Dean Morgan). He will be bringing others in to help with the fight. Rick and his crew still do not have the weapons they need nor do they have the manpower, so they will be working towards that.

In the video you see Rick with his group and some from Hilltop. Jesus (Tom Payne) from the Hilltop Colony will be taking Rick Grimes to meet King Ezekiel (Khary Payton). Rick will ask King Ezekiel if he and the Kingdom will join the fight against Negan and the saviors. He wants them to help to fight for freedom for all.

In the second half of season 7 we will finally be seeing the look of fear in Negan’s eyes. Negan knows that Rick, Daryl (Norman Reedus) and the others are typical survivors and he may just have underestimated the Alexandrians. Negan has met his match and they will not go down without a fight.

So Walking Dead fans be sure to tune in Sunday, February 12th to AMC for Season 7B of “The Walking Dead.” We have lots of excitement heading our way and you will not want to miss it. Don’t forget to check often with Soap Opera Spy for all your latest Walking Dead spoilers, news, updates, and much more.