The Walking Dead Season 8 Spoilers: Who is Baby Gracie? How Will It Affect ‘All Out War?’ 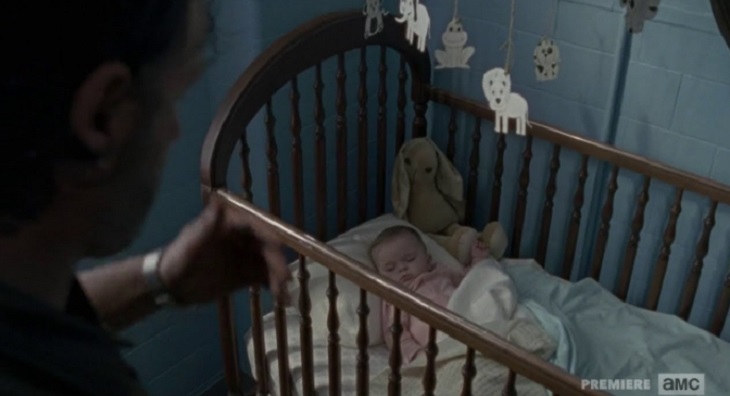 “The Walking Dead” season 8, episode 3 is titled “Monsters.” There are some big questions about last Sunday’s installment, including the baby crib that was discovered at the Sanctuary. Who is baby Gracie? How will Rick Grimes’ (Andrew Lincoln) discovery affect “All Out War?”

Obviously, Gracie is the daughter of two members of the Saviors. Moments before finding the crib, Rick killed the child’s father. He did walk away and eventually had to face Morales (Juan Pablo Pareja.) As fans recall from “The Walking Dead” season 8 premiere, Rick’s flash forward scene shows a little girl with the same stuffed rabbit as what was in the crib.

There are a few theories about this, according to ComicBook.com. The first is that Rick takes the stuffed animal and gives it to baby Judith. However, would he really leave a child at the Sanctuary during a war? That is not Rick’s style at all. In fact, that is why he didn’t kill Negan (Jeffrey Dean Morgan) right away, was to give the Saviors a chance to surrender and switch sides.

Some fans think that Judith was not the little girl in the dream sequence, but Gracie. However, would he really take someone else’s child? It is true that the father is dead, but the mother must be around somewhere. Plus, how would he safely get the child out of the Sanctuary without getting them both killed? This also seems to suggest that something happens to Judith.

Another theory is that the mother gets to keep her life and child, but Rick grabs the velveteen rabbit for Judith. We can see Rick doing something like that, especially if he is going to spare the mother’s life, if she even still alive.

The final theory, and probably the most unlikely one, is that Rick grabs the rabbit for Judith, but leaves the baby in the crib. Understanding Rick in “The Walking Dead,” it is extremely unlikely that he would do this. There is a war going on and if he leaves that child there, she will likely die. Then he will steal her only comfort, a stuffed rabbit?

“The Walking Dead” season 8 spoilers suggest that Rick’s discovery will let him know that there are innocent lives at the Sanctuary. Perhaps it will lead to some sort of rescue mission or an ultimatum for the Saviors with families. One thing is for sure, Rick was really sick realizing that there are babies and children involved. This is something he had not considered before.

What do you think is going to happen with baby Grace in “TWD?” Keep watching the AMC series check back with Soap Opera Spy for the latest in “The Walking Dead” spoilers, updates and news.

The Young and the Restless (YR) Spoilers: Hilary Plays Games With Jordan – Devon Remains An Option

EastEnders Spoilers: Shirley Resorts To Blackmail to Save Tina, Will Justice Be Served For Janet?