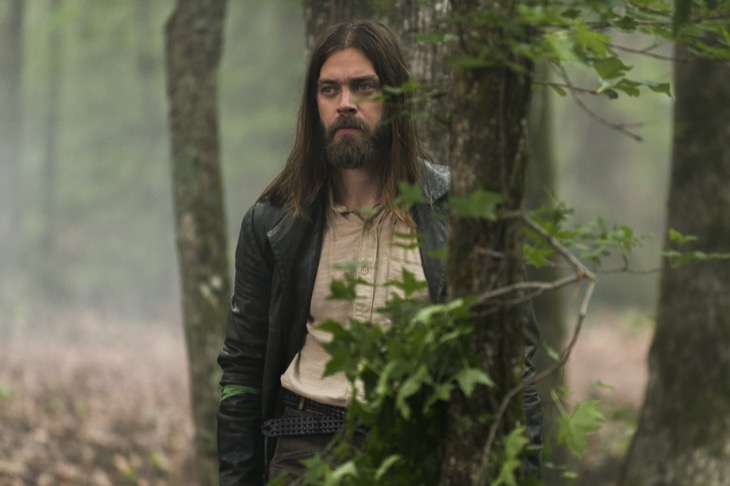 “The Walking Dead” season 8, episode 3 is titled “Monsters.” Airing on AMC this Sunday night, what can everyone expect from the upcoming installment. Keep reading for all details and check out the clips below.

In the promo clip for “Monsters,” the war is well underway. Some fans were wondering if King Ezekiel (Khary Payton) was a bit overconfident. Either he is playing the Saviors, or something happens that could end his regal reign. At the end of the clip, Ezekiel and the Kingdom soldiers appear to be surrendering.

However, chances are that they have something up their sleeves. There is no way that they would give up that easily. Especially since there doesn’t seem to be a particularly large number of the enemy and there are not a whole lot of dead bodies lying around. This must be part of a bigger plan.

The promo also shows in other scenes that there will be a lot of gunfire. Previous “TWD” spoilers revealed that Carol Peletier (Melissa McBride) would be back to her warrior self. In “Monster,” expect to see her firing a weapon and showing no mercy. She knows what needs to be done. Her psychological turmoil and regret can wait until after they celebrate the victory.

A sneak peek for “The Walking Dead” season 8, episode 3 was also released. It focuses on Rick Grimes (Andrew Lincoln) and Morales (Juan Pablo Pareja.) Still pointing a gun at the Alexandrian, the Savior promises that the Saviors will deliver him to Negan (Jeffrey Dean Morgan.) It appears that this time, Rick knows he can’t negotiate out of death. However, someone might be on the way to help.

There is a theory that Daryl Dixon (Norman Reedus) or another character will come up behind Morales. When that happens, expect someone to pull the trigger. Even though it has been teased that Rick could die at some point, it won’t be right now. It is too early in the story, especially since the war has just begun.

What do you think will happen in “TWD” season 8, episode 3? Keep watching the AMC series and check back with Soap Opera Spy for the latest in “The Walking Dead” spoilers, updates and news.

The Young and the Restless (YR) Poll: How Will Zack Be Written Out?