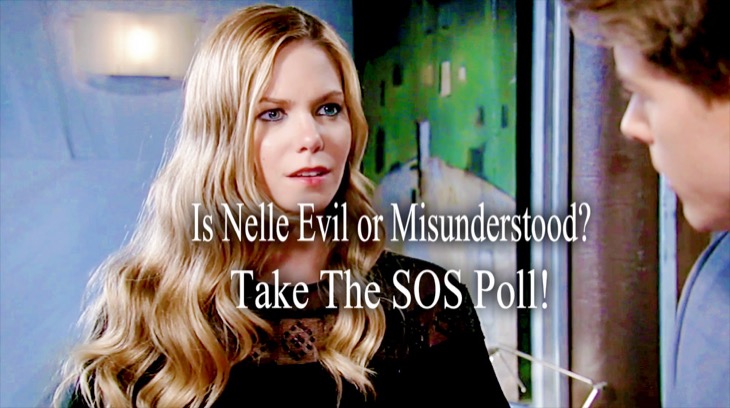 General Hospital (GH) spoilers have revealed that Nelle Benson (Chloe Lanier) has repeatedly done destructive things, sabotaging her relationship over and over again with Michael Corinthos (Chad Duell), but is she truly a bad seed or is she just completely misunderstood with her intentions? Please vote and let us know what you think!

Fans of the ABC soap opera know that Nelle arrived in Port Charles in August 2016, under the guise that she was there to meet Josslyn Jacks (Eden McCoy) because she believed she was Joss’ kidney donor; but it wasn’t long before she turned on the Corinthos family who seemed to take her in as one of their own after the unwilling sacrifice she made to save Joss.

GH sources show that Nelle went down the same road as Carly Corinthos (Laura Wright) did when she wanted to exact revenge on her biological mother, Bobbie Spencer (Jacklyn Zemen). Nelle drugged mob boss, Sonny Corinthos (Maurice Benard) and made it seem like they slept together, causing a rift between Carly and Sonny; only for it to be revealed that Nelle was the daughter of Carly’s adopted father, Frank Benson. Carly’s actions have been forgiven, is Nelle redeemable too?

Nelle has not always been a nice person, and seems to be very conniving when there is something she wants. Remember how she framed Avery’s (Ava and Grace Scarola) nanny for stealing jewelry? How about her stealing money from the Metro Court, where Carly so graciously hired her before the truth about her parentage and what she has done to Sonny was revealed?

General Hospital spoilers tease that suspicion follows Nelle everywhere as she has repeatedly lies to Michael and his loved ones. She hates that he has dug into her past, finding out that not only did she lie to the police during their investigation into the suspicious death of her fiance, Zack Grant; but she seems to be following a pattern of trying to alienate Michael from his family, just like Zack’s sister, Sharon (Brea Bee) explained to Carly.

Nelle is a hard character to believe in, especially when she has this evil look on her face every time she was able to convince Michael she wasn’t lying. Nelle has spent a year in a mental facility, and one has to wonder, is she truly mentally ill and simply misunderstood in what she has been doing, or is there something far more sinister going on with her?

How do you feel about Nelle Benson and all her actions since she arrived in Port Charles? Do you think she is a bad seed or simply misunderstood? Please vote and let us know what you think!

Be sure to tune into ABC’s General Hospital (GH) to catch up on everything happening right now and do not miss as Nelle’s story continues to unfold. Check Soap Opera Spy often for updates, news, rumors and spoilers!