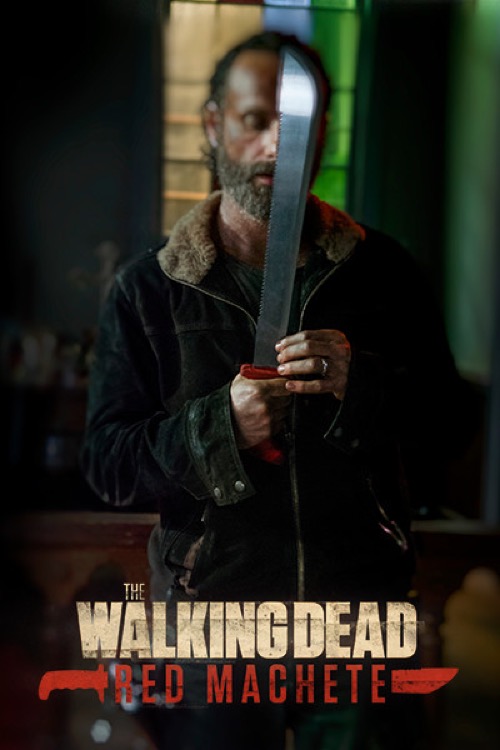 The Walking Dead Red Machete is a brand new digital series. Fans can watch how a red-handled machete went from a hardware store shelve to performing in the zombie apocalypse.

The first chapter of The Walking Dead Red Machete was released in late October. It is just over two minutes in length.

In the first episode of the digital series, titled “Behind Us,” the apocalypse begins.

The camera zooms on a shelf at Gerald’s Hardware. As the lights flicker, it rests in a box but appears to be silently calling out to survivors to use it. Out of everything else on the shelf, it is the only thing worthy of fighting the walking corpses that are taking over the world.

One survivor frantically grabs it, tries to yank the weapon out of the box. Unfortunately, he fails to pierce the brain of the undead. From there, it switches hands, but you still see familiar faces from the previous scene, just in a new location, fighting another member of the undead. These include two girls, one a teenager and the other quite a bit younger.

Expect to see food supplies dwindling as a man tries to teach the teen how to use the machete. We won’t give away the ending, you’ll just have to watch The Walking Dead Red Machete for yourself.

For those that don’t recall, Rick used that same machete to kill Gareth (Andrew J. West.) He was the villain in season 5, the leader of the cannibalistic community Terminus.

“The first chapter of this digital series follows the path of a red-handled machete from its innocent beginnings on a hardware store shelf at the start of the apocalypse, as it lands in the hands of survivors good and evil, familiar and new.”

As Season 8 of the TV show airs, new chapters in the digital series will be uploaded to AMC’s official website. However, there will be only five chapters, so it is just for a short time.

Keep watching the AMC series and check back with Soap Opera Spy for the latest in The Walking Dead Season 8 spoilers, updates and news.