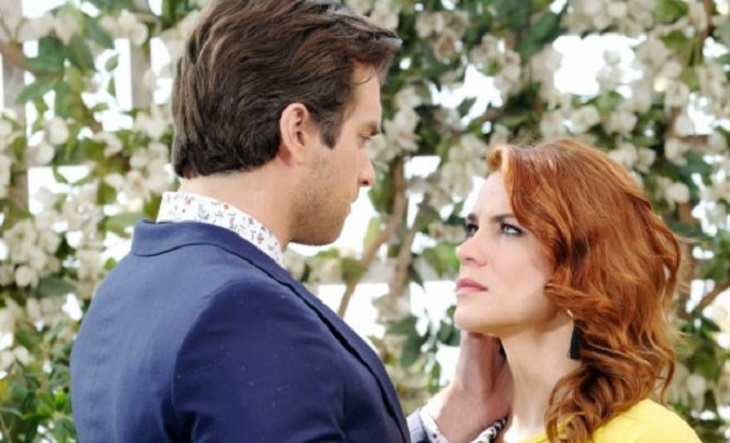 Soap Opera Digest shared that Thomas will call Sally and tell her that he’s decided to stay in New York with Caroline Spencer (Linsey Godfrey). He added that he enjoyed their time together, but his son and Caroline need him right now.

Sally understood why he felt he needed to stay with his young son and Caroline, but it didn’t stop the pain. She had hoped that he would return to her and they would rebuild Spectra Fashions together. However, that would not happen as he will be staying in NYC permanently.

The Bold and the Beautiful spoilers indicate that the news that Thomas wasn’t coming back to Los Angeles hits Sally hard. She had told everyone that Thomas would return. She thought they would end up married with children down the road. Now, she must tell her family and loved ones that Thomas chose a life with Caroline over his love for her and Spectra Fashions. B&B fans can see why that would be a difficult pill to swallow.

While Sally will be fine without Thomas, losing someone you love is never easy. She thought they would be the odds and be happy forever. She never anticipated that Caroline would sweep in and steal her man. Yet, that’s exactly what happened.

Pierson Fode announced on social media she would be leaving the role, Thomas Forrester. Bold and the Beautiful has not revealed Thomas’ future. At this point, the B&B fans aren’t sure if Thomas will be recast. They didn’t expect Thomas to stay off the canvas and stay unaware of Bill (Don Diamont) and Caroline Spencer’s betrayal.

Do you think Sally will rebuild Spectra Fashions? Were you shocked by Pierson Fode’s exit? Do you think B&B should recast the role of Thomas Forrester? Stick with Soap Opera Spy for more The Bold and the Beautiful (B&B) spoilers, news, and casting updates!