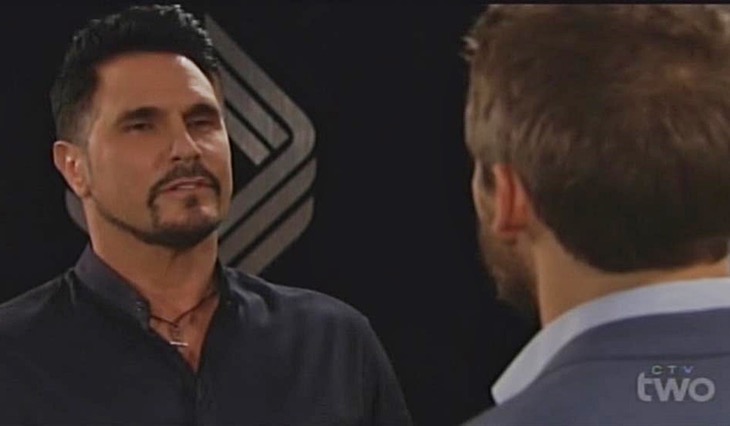 Tenured viewers know Bill’s (Don Diamont) history on ‘The Bold and the Beautiful’. So does Liam (Scott Clifton). Whether the younger Spencer’s bold move to push back his father will benefit Bill in the long run remains unknown.

Embracing a rebuke isn’t easy. Liam basically staged a one-man coup against Bill and has temporarily won. However, Liam’s main intention wasn’t a power grab. Instead, he was practicing tough love.

One tactic Liam used was ‘Dollar Bill-esque‘ to be sure. Secretly recording a conversation, where Diamont’s character fully admitted to having ordered the Spectra building to be burned down so he could build Sky (Bill’s longed for legacy skyscraper) on that exact parcel, proved fully effective.

No change would have happened If Liam had merely threatened his dad with verbal proof, meaning Bill’s recent admission that wasn’t digitally documented and then emailed as a backup. Liam employed methods he’d seen and experienced to trap his dad.

Bill has only seen green lights in recent years. His bravado fueled increases in stature and the cycle simply kept repeating until he spun out of control and over the line of the law.

While Sally (Courtney Hope) isn’t the ideal underdog, Liam’s protective instincts toward her are well-intentioned. Spectra didn’t deserve to have its work destroyed and therefore be put out of business. That just wasn’t right.

The demons that lie within every person can be fought. But free will muscles, which Liam has far more of than his father, evidences character.

Viewers aren’t naive. They know that Bill telling Brooke (Katherine Kelly Lang) that he’s taking a break from the business isn’t surrender, or a sign that an instant epiphany has occurred.

Perspective is gained by each person based upon unique human circumstances. So it will be up to Liam to prove to his father that what’s he’s done benefits the company and Bill himself.

All who doubted Liam’s verve should now be hesitant to bet against his efforts in leading Spencer, or to subsequently convince his father that his actions were just. Ideally, father and son will reconcile and lead the business together, in time.

The Young and the Restless Spoilers: Cane and Devon Threaten Flirty Photographer At Fake Gym – Jordan Won’t Back Off