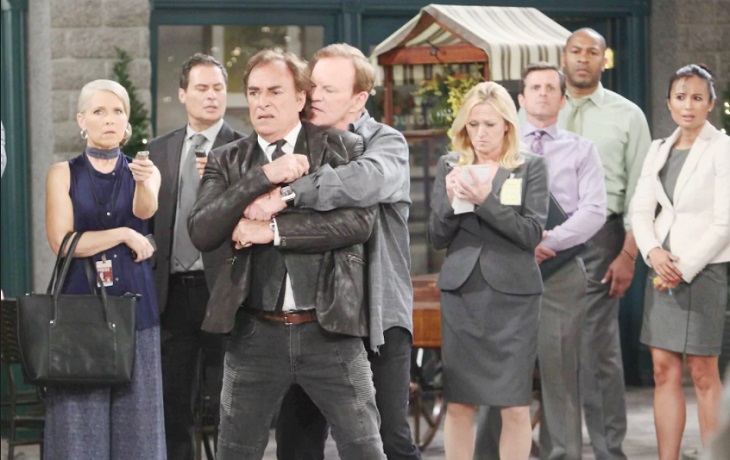 “Days of Our Lives” spoilers for the week of September 11 reveal that there will be business drama for one prominent Salem family. DiMera Enterprises will have some major conflict. It is being described as “Clash of the Titans.” Find out what to expect from the storyline.

Last week, DiMera Enterprises received some bad publicity. Andre’s (Thaao Penghlis) plan to get rid of Kate Roberts (Lauren Koslow) backfired. Instead of gaining control of the company, Hattie Adams (Deidre Hall) managed to have him hauled off to the mental hospital. It happened during a press conference with reporters and it was quite the spectacle.

“Days of Our Lives” spoilers tease that Andre, along with John Black (Drake Hogestyn) and Marlena Evans will be rescued. However, DiMera Enterprises will have to do some damage control. The board is not happy and has shared their concerns with Kate.

Expect Chad DiMera (Billy Flynn) to confront Andre about his dirty scheme. It will cause a lot of tension with “Kandre” blaming each other. Expect an epic fight between Chad, Andre and Kate. They not only have to recover from the public humiliation, but the board could make drastic changes over who controls the company.

The whole reason why Andre and Kate married was so the company wouldn’t be in the hands of an outsider. Chad was stranded on a Greek island and Andre has a controversial past. Kate was the best option, but she needed to be a DiMera. Chad was told he could regain control in six months. It might be much sooner, though.

“Days of Our Lives” spoilers reveal that Andre will make his brother a surprising offer. Could he finally realize that the best person to run the family business is Chad? The board would likely agree to this decision. However, Kate won’t like it one bit. She loves Chad like a son, but she also loves power and control. Giving up her position at DiMera Enterprises won’t be easy for her.

Even though the DiMera brothers will feud, things will eventually settle down. On Instagram, Thaao Penghlis teased that after two years, Chad finally cares for Andre like a brother.