Days of Our Lives30 Days Of Soap Throwbacks 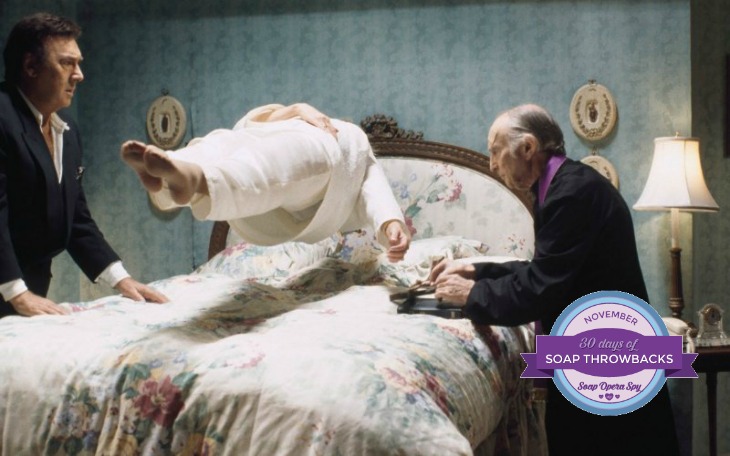 Days of Our Lives has had some wild storylines in the past 50 years, but the Marlena Evans [Deidre Hall] demonic possession storyline was one of the most ridiculous, yet interesting plots in all soap history. The storyline was far-fetched, but helped bring millions of viewers to find the “Days of Our Lives’ love; it was a win-win for the network.

In 1994, “Days” TPTB decided to make one of the core contract characters be possessed by the devil. They took the plot of the movie “The Exorcist” and make it play out on daytime TV. Stefano DiMera [Joseph Mascolo] was quite smitten with Marlena and kidnapped her to try exhibit mind control through manipulation and strong drugs. He started to give her drugs that made her crazy and hallucinate. The drugs brought a satanic force in her life, opening her up to a good old-fashioned demonic possession.

While she worked with Satan, she did a number of illegal acts, including burning down a fish market and a Christmas tree, tried to kill Billie Reed [Lisa Rinna] and Bo Brady [Peter Reckell], and tried to kill a policeman when he tried to restrain her. The possession gave her the power to fly, have a super-human strength, allowed her to change into other characters on the show. One of the more comical parts of the storyline was when she morphed into a panther, so she could attack religious people who were trying to help her. It seemed like the plot went on forever and would never end. Then in summer 1995, someone finally realized that she wasn’t herself.

Marlena tried to kill John Black [Drake Hogestyn] and Kristen Blake [Eileen Davison], but John [who was a priest] picked up on the signal’s that she wasn’t herself and wondered if she could be possessed by Satan. They tried to band together to do an exorcism to save her, but it failed. Her head turned all the way around, and she floated in the air, much like the movie. The demons won, and Marlena died.

Marlena was placed on the altar in the church, and they brought her back to life. The moment was one of the most ridiculous and best storylines in history. Deidre Hall noted that the storyline was epic and one of her favorite plots in the 30-plus years on the show. Do you remember the demonic possession of Marlena Evans?

The Young and The Restless Trivia: How Well Do You Know Y&R History? Take The Challenge!