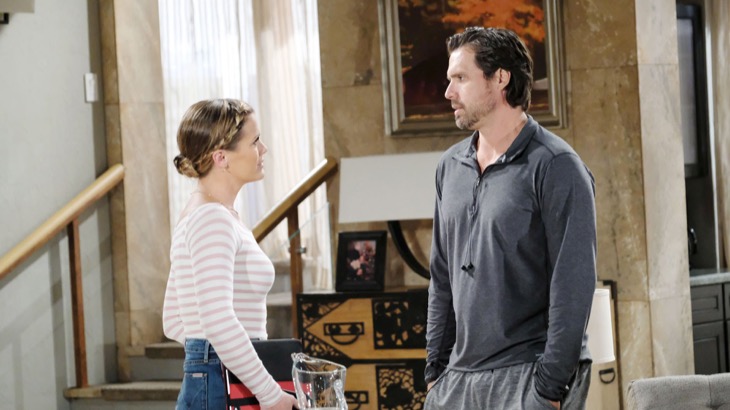 Many characters on The Young and the Restless would be impacted if ‘Chick’ actually splits and ‘Shick’ reunites. However, the likelihood of those changes actually happening can’t be instantly rejected.

Chelsea (Melissa Claire Egan) and Nick (Joshua Morrow) aren’t on the verge of a breakup. Yes, the backstory that was divulged by Hilary (Mishael Morgan) on the ‘Hilary Hour’ has affected Nick’s perception of his current significant other. However, this disagreement feels like the undercard to a potential main event fight, which assumes one will be scheduled.

If Y&R opts to address and resolve the Christian (Jude and Ozzy McGuigen) paternity issue, then ‘Chick’ would almost certainly dissolve. The revealed information about Adam (Justin Hartley) being Christian’s father would absolutely crush Nick’s soul. But that would also come after Nick learned about Chelsea’s previously undocumented past.

Chelsea cited Nick’s personal resume as a reminder that he shouldn’t be looking down on her. However, like his father, Mr. Newman doesn’t often compare whatever he’s done to another person’s misdeeds. Nick believes that any form of supposed betrayal of trust gives him license to make relationship ultimatums.

Meanwhile, Sharon (Sharon Case) doesn’t know that Scott (Daniel Hall) just broke trust with her. The life-threatening circumstances he was facing, which included flashbacks to his kidnapping, don’t justify what he and Abby (Melissa Ordway) did in the storage unit. But it seems unlikely that Sharon will project that perspective when she inevitably learns what happened.

LOVE Y&R?  MAKE SURE TO SUBSCRIBE TO OUR THE YOUNG & THE RESTLESS NEWSLETTER, HERE!

Considering both pairings referenced, a third factor would have to come into play for ‘Shick’ to potentially reunite. ‘Chick’ and ‘Shott’ would likely have to break at approximately the same time, thus leaving Sharon and Nick vulnerable within a similar chronological script space.

Surely each of the moving parts can be synced by Y&R’s writing staff. Choosing to break up ‘Chick’ and or ‘Shott’ would be dramatic. But reuniting ‘Shick’ would be historical, have a major impact on Genoa City and therefore is certainly being considered carefully, if at all.

Fans of ‘The Young and the Restless’ rightfully express their opinions on a regular basis. So, do they think that Chick will split, Shick will reunite or that both events, or neither event will take place? Please vote in our poll below!