Neighbours Spoilers: Big Trouble Ahead For Leo And Mishti 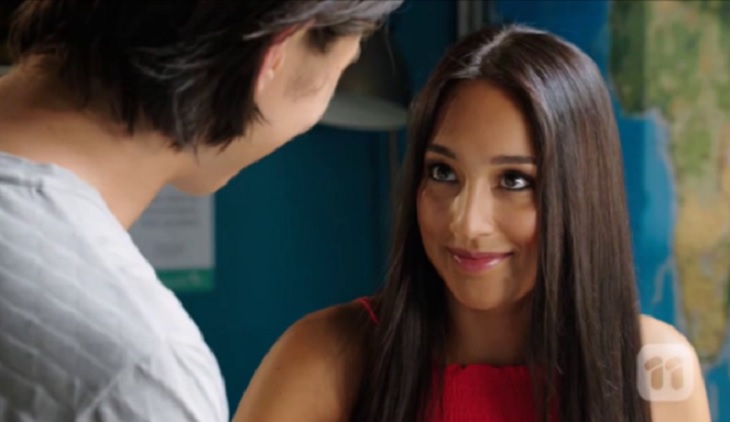 Neighbours spoilers tease that Misthi Sharma and Leo Tanaka hit another block in their fiery relationship next week, when he catches her in a lie.

It’s not just viewers who are caught up in, and fascinated by, the ‘Who Killed Hamish Roche’ murder investigation; residents of the street are just as interested. This is especially true for Mishti Sharma (Scarlet Vas), who decides to get involved in the case, risking her relationship with Leo Tanaka (Tim Kano) in the process.

This isn’t the first time Mishti has got herself involved with the work of the police in Erinsborough. When she moved onto Ramsay street with her sister’s family in April this year, fans were quick to suggest that Mishti may have previously been involved with the police force, due to her inquisitive nature and decisive behaviour in emergencies.

These fan theories intensified after the incident at the Backpackers, when Amy’s ute crashed into the building. Injuring Piper and David in the process, Mishti was quick to come to their aid in a cool manner, making it obvious that she has been involved in the emergency services before.

Shortly after this, Mishti intervenes when Tyler gets into a fight with T-Bone, announcing that she has a duty to the police force to report him. As a result of this Mishti reveals that she is a former police officer, quitting after she suffered a minor breakdown due to the death of her ex-fiancé and fellow police officer Xader on the job.

As a direct result of her past, Mishti is always keen to get involved in local police cases on Neighbours, even when her input is unwanted. This time, her involvement comes at a major cost to her already rocky relationship with Leo.

After noticing that both Gary and Sheila are acting strangely after the death of Hamish, Mishti believes she sees a discrepancy in their alibi. Of course, spoilers already reveal that Gary approaches Paul for a fake alibi, so her intuition is correct.

Following her instincts, Neighburs spoilers tease that she blows Leo off, deciding instead to investigate further herself. She doesn’t want Leo to know what she’s doing though, so decides to tell him that she is spending the afternoon with Dipi and Shane. When Leo decides to go over to the Rebecchi house later that afternoon, he is shocked to her from Shane that they have no plans today.

Confused, Leo uses the tracker on his phone to find Mishti, but becomes paranoid when he sees she is at Lassiters. He later confronts her, growing angry when she refuses to explain her actions. Reminding her that trust works both ways, Leo can’t work out why Mishti has lied to him.

Will Mishti come clean, and will her own exploration be vital to the murder investigation? Watch Neighbours on Tuesday November 14th to find out.