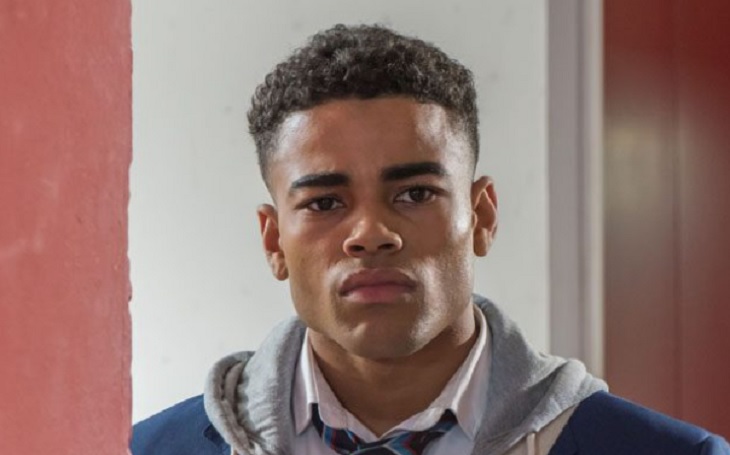 Is Prince McQueen (Malique Thompson-Dwyer) targeted for death on Hollyoaks? The odds aren’t in his favor when he decides to play hero after the fiery school explosion.

And we know that at least one person won’t make it out of the chaotic mess alive. Will his be the next coffin ordered?

Seething with rage, the silver fox takes a sketch that Hunter drew and sets fire to it, eventually leading to the explosion.

The explosion couldn’t come at a worse time, as a special ceremony is being held after school has let out.

Dozens of teachers and students are caught in the horrific blast, including Alfie Nightingale (Richard Linnell), Yasmine Maalik (Haiesha Mistry), Tom Cunningham (Ellis Hollns), Peri Lomax (Ruby O’Donnell) and Lily Drinkwell (Lauren McQueen), and scary images show them trapped in a life-threatening situation, with rubble and debris strewn all around them.

The only one who can save them is Prince, but his high-risk plan may spell doom for one of more or the frightened characters.

A quick-thinking Prince uses the only means he has, his ladder, to get the others out. But they don’t have to climb down the ladder, that would be too easy!

Instead, they have to gingerly climb across the prone rungs as they lay precariously over a gaping chasm. This doesn’t look wise, and I’m sure it wasn’t taught in ladder safety class!

But Prince is insistent and he successfully coaxes a panicked Peri across the death-drop first, with a very scared Lily next to attempt the acrobatic feat.

Does she make it to the other side? Tune in, Hollyoaks fans, the answer may surprise you!  Check back for more Hollyoaks spoilers right here!

The Young and the Restless (YR) Spoilers: Victor Gains Opportunity To Help Nick – Fire At The Underground