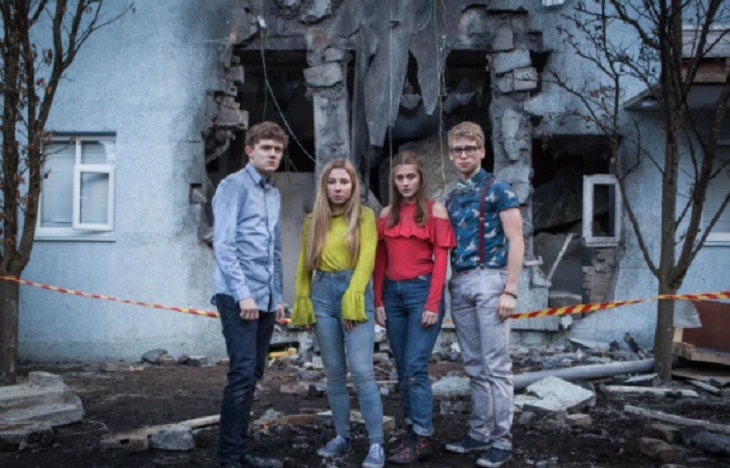 A frightful week is on the horizon for Hollyoaks fans who can look forward to a ghoulish autumn stunt this year. This we can confirm: at least one character will not make it out of Hollyoaks alive.

First off a huge explosion rocks the school in the middle of an important event, and none other than Mac Nightingale (David Easter) is the perpetrator!

What can possibly top that epic fireball nightmare? Hang on, we’ve got all the sensational spoilers for you!

Unable to contain himself, the silver fox takes a sketch that Hunter drew and sets fire to it, eventually leading to the explosion. Will everyone make it out of the scary firestorm alive?

Later, Hunter McQueen makes a brave attempt to save Sally (Annie Wallace). Of course, he has no idea that it was his handiwork that set the school ablaze; awkward!

Luke (Gary Lucy) and Darren (Ashley Taylor Dawson) are at the school when it goes up like a matchstick, and together they ascend an air vent presumably to safety. But before they can escape, their path is blocked off.

Elsewhere in the school, the teen scene is rumbling. The girls involved in the controversial self-harm storyline, including Peri Lomax (Ruby O’Donnell) and Yasmine Maalik (Haiesha Mistry), are feuding, and one of them threatens to blow the cover off their covert activity. Will the others allow their behavior to be exposed?

Later, a trapped Peri gives vital intel that helps firefighters in their efforts to rescue all alive. But does her info come too late to save everyone present? Hint: Louis Loveday (Karl Collins) and Jack Osborne (Jimmy McKenna) are both on the scene, but fans are speculating that only one lives to see the light of day.

And then there’s Sierra (Anna Passey). The good news is that the pregnant lady finally goes into labor, the bad news is that she must rely on Warren (Jamie Lomas) to get her to the hospital before it’s too late!

Emmerdale Spoilers: Daz’s Story Will Tug At Your Heartstrings