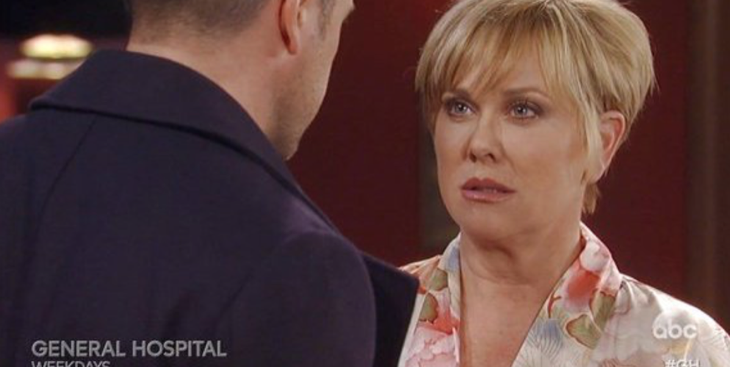 General Hospital (GH) weekly spoilers for Monday, February 13 to Friday, February 17, 2017 reveal Julian Jerome (William deVry) meets with PCPD Police Commissioner, Jordan Ashford (Vinessa Antoine), where she reveals they have evidence to clear Sonny Corinthos (Maurice Benard). Julian worries they know about him and his sister, Liv St. John/Jerome (Tonja Walker). He will be cornered and pressured into making a deal with the devil herself.

GH sources reveal Dr. Hamilton Finn’s (Michael Easton) addiction is causing him to the behave out of sorts. Can Hayden Barnes (Rebecca Budig) handle the stress of both her personal and professional life?

Franco Baldwin (Roger Howarth) has been struggling with his inner demons for a while now; happy to be with Elizabeth Webber (Rebecca Herbst) but concerned if they can make it in the world outside their bedroom. Meanwhile, Liz works with the nurses who are threatening to strike the mass firing. Liz fights for herself but also turns to an unlikely source, Samantha Morgan (Kelly Monaco).

General Hospital’s PCPD Nathan West (Ryan Paevey) seems to be stuck playing peacemaker between his wife, Maxie Jones (Kirsten Storms) and sister, Nina Reeves (Michelle Stafford). Nina fired Maxie for allowing Lulu to visit with Charlotte, when she entrusted her to watch her. Will Nathan be able to settle things between them?

Related: Agent Karl Reveals Info To Anna – Can She Handle The Truth About Valentin?

PI Curtis Ashford (Donnell Turner) recently visited Ava Jerome (Maura West) to see if she was the one on the recording with Julian; when he learned she wasn’t he quietly left her gallery. He then spoke to Jordan about the case and their feelings; he left disgruntled and in a dangerous mood. Spoilers suggest he could return to Ava and continue to toy with danger.

GH’s Anna Devane (Finola Hughes) appears to question Liv, who she sees while she is waiting for the elevator. It is clear she is going to want answers and will receive answers from someone very unexpected. Could the truth finally be revealed?

Be sure to tune into ABC’s General Hospital (GH) on Monday, February 13, 2017 to catch up on all the exciting stories happening this coming week. Check Soap Opera Spy often for updates, news, rumors and spoilers!

‘The Bold and the Beautiful’ Spoilers Week of February 13 to 17: Sally Crashes Wedding – Bill Jealous – Quinn and Ridge Flirting Heat Up

‘The Young and the Restless’ Spoilers Week of February 13 to February 17: Colin Lost Jill’s Money, She Throws Him Out – Nick and Chelsea Kiss – Cane Romances Lily