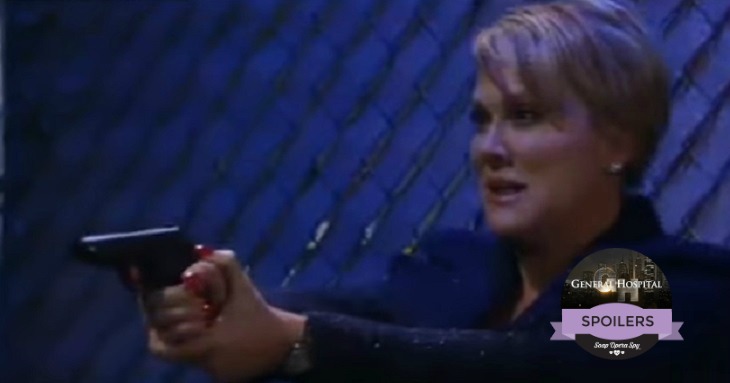 General Hospital’s Carly Corinthos (Laura Wright) meets Nelle Hayes Benson (Chloe Lanier) at her place and threatens that there will be hell to pay if she ever goes near her family again.  Nelle recently shared her reason for targeting Carly and Sonny Corinthos (Maurice Benard); she is apparently Frank Benson’s daughter and was only in Port Charles for the payout she felt Carly owed her.

GH’s Sonny comes to see his son, Michael Corinthos (Chad Duell) to apologize for his one-night-stand with Nelle; one has to wonder when he will learn that he never did have sex with her.  Will Michael be so forgiving since he really did have feelings for her?

In court, the epic custody battle has begun.  Sources show Laura Webber (Genie Francis) share her confidence with Lulu (Emme Rylan) and Dante Falconeri (Dominic Zamprogna), saying things will work out the way they are supposed to.  Could she be wrong about Nina Reeves (Michelle Stafford) taking her advice?

General Hospital’s Nina takes the stand at the custody hearing, where she tells the judge she felt it was best to tell the court the truth about her marriage.  Valentin Cassadine (James Patrick Stuart), her husband, looks a little concerned about what she is going to share about their current struggles.

At General Hospital Griffin has either transformed into Duke, or he is playing Liv; but as he tries to protect Anna Devane (Finola Hughes); spoilers reveal Liv saying, “Sorry my love, but Anna has to die!” as she aims her gun at Anna.

Be sure to watch ABC’s General Hospital (GH) on Wednesday, March 8, 2017 to catch up on all these exciting stories and more.  Check Soap Opera Spy often for updates, news, rumors and spoilers!

‘Days of Our Lives’ Spoilers: Hospital Chaos Leaves Kayla in Danger – Steve Gets Info on His Other Son – Dario Imagines a Kiss with Abigail